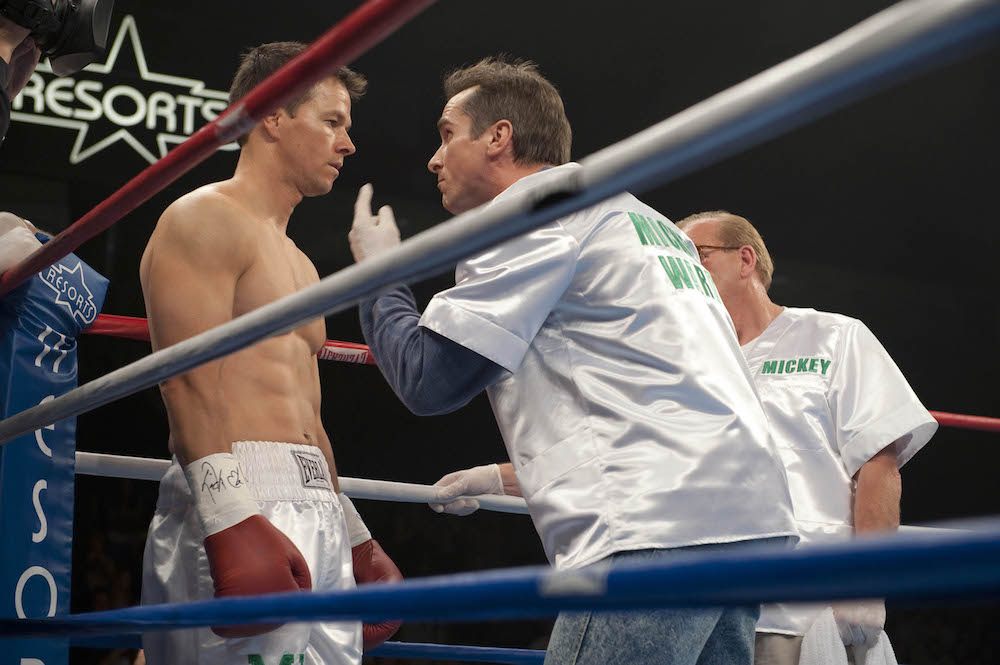 Virtually flawless performances and directorial execution render The Fighter one of the most thrilling movies of 2010. Yes, The Fighter offers a new riff on the old standby genre of the boxing film, but to regard the movie solely in those terms vastly diminishes its import. Reminding us at once of the soulfulness of Rocky and the visual finesse of Raging Bull, The Fighter runs laps around those touchstones to create a movie that’s really a drama about self-delusions, inner strength, and the family as a paradoxical source of conflict and sustenance. And, in a way, it’s also a story about Lowell, Mass., a mill town that was once a beacon of American industry and then left to decay among the detritus of our post-Industrial Age. Boxer Dicky Eklund (Bale) was once known as the “Pride of Lowell” and now he’s training his younger half-brother Micky Ward (Wahlberg) to be a champion. The movie is based on incidents from the true-life story of Ward, who went on to have a storied career. However, The Fighter doesn’t cover the triumphant part of Ward’s life. Instead, it examines Ward’s early years, the period during the late Eighties and early Nineties when he lost several fights, retired for the first time, romanced Charlene Fleming (Adams), and began his comeback. Central to his story are the people in his life, the people who both impede and promote his success. Chief among them is Dicky, his crackhead brother and trainer. Bale’s performance is a thing of brilliance, capturing the physical contradictions of the character’s residual athleticism and corrosive addiction. Watch the scene in which Dicky runs through the streets of Lowell, hours late for a sparring appointment and sprinting forward with a loose-limbed but focused posture, or when he jumps from the back window of his crackhouse onto a giant pile of trash and comes up smelling like a rose in a pathetic move that would send others to the hospital. (Bale is so good in this role that I almost forgot he was in this film, and thought for a while that I was watching Daniel Day-Lewis.) Bale’s extraordinary efforts are equaled by Leo as Alice, the mother of Micky and Dicky, as well as seven other daughters, who form a sometimes frightening, sometimes comical Greek chorus of harpies. Alice, who manages Micky’s career, wears virtual blinders when it comes to the realities of her children’s lives, but her offspring nevertheless have no greater champion. And Adams, after a few turns playing princesses and the like, returns to the kind of role she does best: a loyal, working-class woman with a surfeit of inner confidence. Wahlberg, as the central character, remains understated throughout, smartly anchoring all the chaos around him. Russell keeps the movie grounded in the characters and their fascinating interplay, while the exacting camerawork (by Hoyte Van Hoytema) moves hungrily through each scene, ever watchful for the telling moment. Russell’s characters are neither good nor bad; they are simply human beings imbued with virtues and faults. It is this intelligence, conveyed through the choices made by the actors and director, that makes The Fighter a great and enduring human drama.