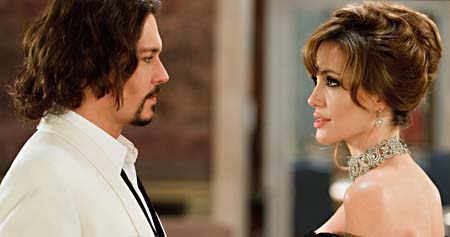 Interpol wants to catch a thief, namely Alexander Pearce, who has stolen more than $2 billion. For some reason, despite all their technical gadgetry, these top cops have no idea what their suspect looks like, so in order to pick up his scent, they spend two years earnestly watching his girlfriend, Elise (Jolie). Their efforts pay off once she receives a note delivered by courier instructing her to catch the next train to Venice and pick a man of Alexander’s general height and build to serve as an unwitting decoy. And that stranger on a train? He turns out to be none other than Johnny Depp, in the role of Frank Tupelo, a widowed math teacher from Wisconsin. This film (which was adapted from the little-seen French thriller Anthony Zimmer, and written by Christopher McQuarrie, Julian Fellows, and von Donnersmarck, whose film The Secret Lives of Others earned a Best Foreign Film Oscar) obviously strives for a Hitchcockian vibe of romance and suspense. True, many twists and turns occur. Nevertheless, The Tourist doesn’t generate much suspense or intrigue. Von Donnersmarck’s direction is dull and flat. Opportunities for using the camera as an instrument to create suspense are squandered continually, which allows viewers to dwell on the practical absurdities of the plot twists, further frittering away any sense of narrative tension. A motorboat rescue and chase sequence in the dark nighttime canals of Venice is especially frustrating, as it constitutes one of the slowest, most underlighted, and uninvolving action sequences ever put to film. Certainly Jolie and Depp are equally matched in star wattage, but they prove an inert love match onscreen. No Cary Grant/Grace Kelly magic here: The pair conveys squat as far as onscreen chemistry goes. As Frank, Depp goes from befuddled mark to daring participant while delivering one of the most lackluster performances of his career. For her part, Jolie is never required to do much more than strut her luscious stuff and show us why a thief might risk $2 billion in order to have her back in his life. Without sizzle or thrills, The Tourist becomes as sluggish and rank as the Venice waterways. 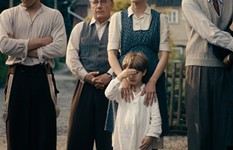