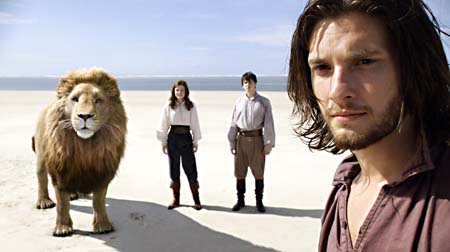 The Chronicles of Narnia: The Voyage of the Dawn Treader

It takes great skill to make something so ponderously stultifying as this third film entry in the ongoing adaptation of C.S. Lewis' series of splendidly imagined children's books. Lewis was, of course, a passionate and committed Christian, and each of the three films (the first two from Disney, this one from Fox) has been released amid a flurry of criticism from Christian and secular audiences alike. This has occurred again (check out NarniaFaith.com for a fascinating cultural train wreck of a movie tie-in). However, what's really lost in translation is Lewis' effortlessly adventurous sense of wonder. The Voyage of the Dawn Treader has all the elements of a rip-roaring Saturday-afternoon matinee (including 3-D, natch) and the intended Christian allegory, yet a more appropriate rechristening would be The Voyage of the Yawn Treader. Really, in a fantastical universe populated by a leonine Christ figure (Aslan, voiced by Neeson), a chatty seagoing mouse (Reepicheep, voiced by Pegg), and a vessel that appears to have been ripped straight from one of Ray Harryhausen's old Sinbad epics, you'd expect some sort of gravitas or, at the very least, some memorable derring-do. However, this film by Narnia newcomeer Apted is heavy on gamer motivations (seven swords must be located and collected, various personal obstacles must be overcome), but murky in emotional heft and drowned in poorly realized 3-D. Lucy (Henley) and Edmund Pevensie (Keynes) are still riding out the Blitz (will it never end?), although they're now accompanied by their irritable and irritating cousin Eustace Scrubb (Poulter, far more entertaining in Son of Rambow). All three are drawn into a magical painting in their bedroom, reuniting them with Barnes’ Caspian (now king), Aslan, and, eventually, Swinton's still-awe-inspiring White Witch. Dawn Treader is bereft of the narrative complexity evidenced in the preceding two films (although neither one was all that complex to begin with), and despite some fine creature effects from KNB and a rousing score courtesy of David Arnold, it still feels as if this franchise has run aground and is sinking under the weight of its own ambitions. Spiritually speaking, you'll probably fare just as well renting Jason and the Argonauts on Saturday and hitting church on Sunday. You'll certainly have more fun.