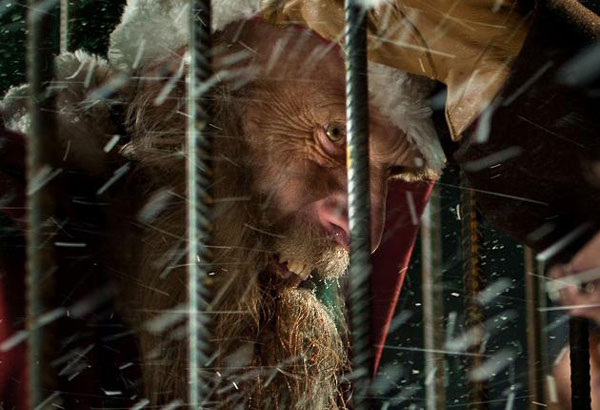 If you're sick and tired of the saccharine explosion of treacly holiday fare that began bombarding us somewhere around Halloween, and if you prefer the pre-Christian rites and pagan revelations upon which so much of the current, Christianized calendar conveniently hangs, then you could do far worse than this year's Fantastic Fest horror favorite, Rare Exports: A Christmas Tale. Set in the icy north of Finland, this small, dark gem out-Scrooges Scrooged and makes Bad Santa look like a feel-good film. Rare Exports depicts the travails of a tiny community of Laplanders forced into battle against a resurrected ur-Santa, complete with massive, goatlike horns, cloven hoofs, and a legion of scrawny, naked, ancient "elves" that look as though they just wandered in from the set of Uwe Boll's Auschwitz. Creepy, no? It's not all blood and death and boiling children alive, though. Rare Exports subverts the usual holiday drivel on multiple levels, adding a noncloying amount of humor and one really cute little kid to what is essentially Rawhead Rex meets 30 Days of the Night Before Christmas. Director Helander barely scratches the surface of one hell of a great idea, but what this Christmas Tale does, it does with wild abandon. When a multinational corporation begins taking seismic samples (so they say) from the peak of the forbidding Korvatunturi mountain, beneath which 11-year-old Pietari (Onni Tommila) and his widowed, reindeer-butcher father live, odd things begin to happen. The valley's reindeer turn up eviscerated, effectively throwing the local reindeer-based economy into sudden tumult. Unnervingly humanlike tracks are found in the snow and, even more disturbingly, outside Pietari's bedroom window. Clutching his favorite stuffed animal and arming himself with his trusty shotgun, Pietari hits the history books and uncovers the disturbing truth about the real Santa. Jolly is not in this crimson nightmare's repertoire, and all that jazz with the presents? Totally inaccurate. This holiday housebreaker is more likely to feast on your sweetbreads than on your cookies and milk. Much of Rare Exports is seen through the eyes of its preteen protagonist, which explains some of the story's minor omissions (who, exactly, hired this nefarious multinational mining outfit and why exactly?). But quibbling about such things would seem to be a fine way to fast-track myself onto you-know-who's Naughty List. Nuts to that; I need new socks.