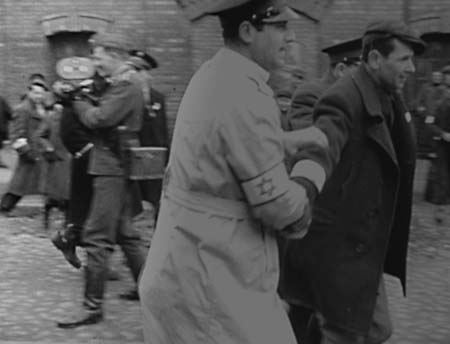 How should one react to A Film Unfinished? That is, on nearly every level imaginable, a question for which there is no single suitable answer. This is a documentary about film footage of the Jews in the Warsaw Ghetto, which was shot in May 1942 by the Nazi film corps. It was overseen by the SS and was ostensibly intended to be edited into a final documentary form with which to convince Germany's "righteous gentiles" that mass extermination of the Jews was, at worst, a necessary evil. Accurately but ominously titled The Ghetto, this propaganda film was never completed. The raw footage was discovered in East Germany after the Third Reich had been annihilated. The purpose of the original footage has been gleaned slowly over time. In the Sixties, one of the film's cameramen, Willy Wist, was identified and questioned by the Israelis. His responses, taken from the transcript of the interrogation, are vague and troubling. According to Wist – whose younger self, at one point, is glimpsed as he accidentally steps into frame in the original footage – he was merely one camera operator among others, given instructions on what and who to film by a mysterious figure known only as "Gold Pheasant." This unknown person was presumably an officer and probably acting on direct orders from Joseph Goebbels, the Nazi minister of propaganda, but beyond (and including) that nothing is certain. What is certain is that 12 years ago a reel of outtakes was discovered and confirmed what had already been suspected: The Nazi filmmakers had staged and restaged much of the "action" that was to have been included in The Ghetto. A great deal of the staged footage creates an illusion of Warsaw's "wealthier" Jews (actual ghetto residents, cleaned up) dining out, relaxing, and enjoying the modest comforts of ghetto life as they parsimoniously refuse to give even a crust of bread to their starving breathren on the filthy streets outside or acknowledge the ghastly, flyblown cadavers that increasingly populate the sidewalks. The 1998 reel shows relentless takes of Warsaw's doomed populace being used as one massive, ghastly prop in a film that, in the end, was never even made. The Nazi filmmakers’ intent is abominably clear, but not completely. Why film the mountains of trash? Why shoot obviously posed portraits of hearty-looking Jews standing beside others who are obviously on the brink of starvation? Every question answered raises two more. In the end, Hersonski's film – which employs narration and inoffensive re-enactments of Wist's questioning in addition to the pre-existing Warsaw Ghetto footage – is a deeply troubling examination of the methodology of propaganda and an indictment of the Nazis’ cunning use thereof. Amid the increasingly horrific images of daily ghetto life are moments of utterly unexpected, haunting beauty, including a reel of color film that does more to humanize an inhuman situation than anything I've ever seen. The screen is flooded with the faces – so many individual faces, peering, imploring, stoic or hysterical – of the 400,000 Jews who made up the Warsaw Ghetto in May 1942. It's impossible to watch A Film Unfinished and not feel haunted by the restless ghosts of history and those who tried – and failed – to use film to tell a lie.