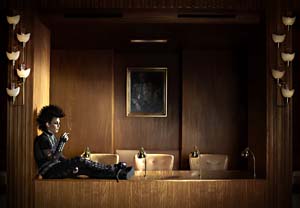 I do not envy American actor Rooney Mara, who, amid much speculation and consternation, was finally named as the luckless actor cast to play Lisbeth Salander, the heroine and titular "girl" of the Swedish action/conspiracy/psychological trilogy that exploded into global pop-cultural zeitgeist with the posthumous publication of Stieg Larsson's phenomenal clutch of paranoiac Svenska-noir novels. The Girl Who Kicked the Hornet's Nest is the concluding chapter in Larsson's epic story arc (following The Girl With the Dragon Tattoo in 2009 and The Girl Who Played With Fire earlier this year). These last two were directed, with a bracingly smart sort of Swedish self-assurance by Daniel Alfredson (who, in a rather charming bit of cinematic savoir faire, was revealed as the elder sibling of Tomas Alfredson, director of 2008's celebrated, undead adolescent romance, Let the Right One In). Neither follow-up can quite live up to the visceral, chilly, black-leather Euro-punch of director Niels Arden Oplev's original film in the trilogy, but at a combined running time of well over seven hours, the very fact that American audiences have taken to Larsson's books and their subsequent cinematic adaptations is, in a word, heartening. Which brings me to the core reason, I think, for such manifestly giddy embrace of the author's work, which spans not just two artistic media but also two entire continents, subtitles be damned. And there’s Noomi Rapace, who so utterly embodies the character of Lisbeth Salander as a sort of forcibly detached, hideously scarred – mentally, physically, emotionally – force majeure that it's inconceivable, for now, that any actor would have the brass balls to place herself at the center of the forthcoming, inevitable Hollywood remakes. (David Fincher will direct.) My condolences in advance to Ms. Mara, who may well be excellent in the role. One thing she won't be, however, is Noomi Rapace, who by now defines the character of Lisbeth Salander, a genius-level hacker who single-handedly raises the darkening fetishistic accoutrements of the BDSM underground to an entirely new level of hot couture while simultaneously emasculating all manner of amoral, wealthy, wizened white males from astride her Yamaha WR250X Supermoto. Salander is assisted in all three films' sprawling anti-corruption campaign by crusading Stockholm journalist Mikael Blomkvist (the sturdy Nyqvist, to be played by Daniel Craig in the remakes), editor of the imperiled muckraking mag Millennium. If The Girl Who Kicked the Hornet's Nest lacks a measure of the sexually turbocharged torque of its precursors, the fault lies not with Rapace or Nyqvist, but with a concluding storyline that breathlessly attempts to weave all those loose ends from the previous films into a cunningly crafted hangman's knot. Salander, horrifically bloodied by the end of Fire but tenaciously unbowed as Hornet's Nest revs up into the crimson redline, eventually receives her day in court, both figuratively and literally. Can this truly be the spiky-smooth consummation of Salander and Blomkvist's epic if edgy partnership? Rumor has it the late Larsson may have one more trick left in his laptop. For now, it's enough to see Rapace's Salander smile, however tentatively, however briefly, however unlikely. Those white teeth framed by black-on-black everything? They bite.

READ MORE
More The Girl Who Kicked the Hornet's Nest 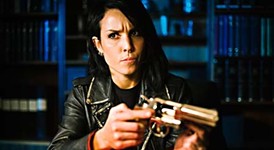 The Girl Who Played With Fire
The world's favorite bisexual, black-leathered, dragon-tatted, hog-riding hacker is back in action.