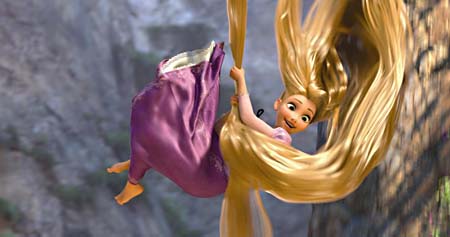 The venerable Disney animators have climbed aboard both the CGI and 3-D bandwagons for their latest holiday release, which is billed as the studio’s 50th animated feature. The story reworks the Brothers Grimm fairy tale Rapunzel, though a title update to Tangled reflects Disney’s desire to appeal to a broader audience (in other words, girls and boys) with its latest “lost princess” legend. The classic hallmarks of Disney animation are all here: stunning attention to the details of nature and the inclusion of an evil mother figure as a trigger for the storyline. This version of the fairy tale posits Rapunzel as a bona fide princess who is stolen by Mother Gothel immediately after her birth. Rapunzel’s flaxen hair has magical powers to heal injuries and reverse the signs of aging, which is exactly what the old hag Mother Gothel has in mind. She stashes Rapunzel in an isolated tower in the forest, where her only companion is a wordless but expression-rich chameleon. Approaching her 18th birthday, Rapunzel longs to partake in the outside world despite the warnings from her “mother” of all the dangers that await her there. So when Flynn Ryder (voiced by Chuck's Levi), a handsome young thief on the run, plops into her forest hideaway during an escape, the capable Rapunzel coldcocks him with a cast-iron frying pan and then ties him to a chair with her 70-foot-long mane. Rapunzel’s hair should be listed as one of the story’s main characters, so intrinsic is it to the film’s appeal. (Ancillary sales should go through the roof: Not since Barbie and My Little Pony has there been a product that appeals so directly to kids’ urges to comb and groom.) As voiced by Moore, Rapunzel is a spunky gal, capable of defending herself and singing sturdily. She’s a delight in a particularly unusual scene in which she vacillates between thinking she’s having the best day ever and that she’s the worst daughter ever. Tony Award-winner Murphy brings stage showmanship to her musical interludes as Mother Gothel, which drip with sarcasm and biting wit. The songs by Alan Menken and Glenn Slater are fun but unmemorable, however. Even though the sight of Rapunzel’s shimmering hair and scenes of flickering lanterns across the skyline are visual wonders, the biggest reactions to the animation seemed to come from scenes of classic physical comedy, as when Maximus, Flynn’s horse and sidekick, behaves like a dog or climbs onto a tree branch that breaks under his weight. Tangled is a serviceable kids’ picture and marks a milestone in the history of Disney animation, but it’s splitting hairs to characterize it beyond that.