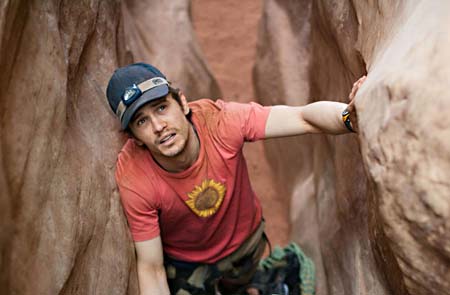 Danny Boyle's 127 Hours is the calm, cool, and tear-your-hair-out exciting mirror image of Tony Scott's bland and formulaic Unstoppable. Both are based on true stories but Scott embellishes his train wreck with all manner of dopey Sturm und Drang, while Boyle, working from a script co-written with his Slumdog Millionaire collaborator, Simon Beaufoy, adapts Aron Ralston's "trapped in the wilderness" memoir with hellishly gripping aplomb. In case you've been living under a rock (or stuck in a crevasse), Ralston is the youthful outdoorsman who, while hiking Moab, Utah's Bluejohn Canyon in 2003, suddenly found himself trapped when a boulder he was perched on collapsed and lodged his right arm between a literal rock and a hard place. Foolishly, Ralston had left home that morning without informing anyone of his intended whereabouts. As Ralston (Franco) repeatedly says, "Oops." 127 Hours is an archetypal tale of man vs. nature vs. himself (Jack London would've loved this). Ralston, after a pleasant morning of mountain-biking and cavorting in Eden-esque underground swimming holes with a pair of newbie female hikers (Tamblyn and Mara), falls from nature's grace and lands in an impossible, horrific situation: His arm is crushed and unable to be freed by any conventional means, he's low on water, and absolutely no one is aware of his plight. His only tools are a cheap Leatherman knockoff knife, a length of rope, some climbing tackle, a video camera (which is deployed to excellent, even endearing, effect), and his wits. It's a bad trip in every sense of the phrase. If and how he extricates himself isn't much of a secret by now; suffice it to say that when you're stocking up on sharp survival tools, buy American. 127 Hours is an unrelenting tour de force but it's also, thanks to Beaufoy's clever script and Boyle's inspired direction, an unforgettable examination of the human spirit under extreme duress. Franco is simply amazing, summoning every actorly skill he possesses to the fore and rendering the real-life Ralston in utterly raw and highly emotional terms that even the most jaded filmgoer can find sympathetic. You'd think the story of one man's claustrophobic and precarious ordeal might grow old pretty quickly, but this is director Danny Boyle we're talking about here, the man who first turned flat-sharing into a viscerally hilarious nightmare in his 1994 debut feature, Shallow Grave. Boyle makes fine and canny use of delirium-infused flashbacks and hallucinatory cinematography (by Anthony Dod Mantle and Enrique Chediak), often including split screen and montage, to relate Ralston's backstory and allow us into his increasingly panicky mindset. That alone is an accomplishment of directorial skill. The fact that Franco gives the performance of his career (thus far, and I'm obviously discounting his stony-cool turn in Judd Apatow's brilliant and beloved Freaks and Geeks) is the icing on the cake. Fair warning, oh squeamish ones: 127 Hours does not shy away from (nor does it stint on) Ralston's ultimate method of obtaining egress from his predicament. Which is exactly as it should be.