Unstoppable is a lot like speed. Not the movie, the amphetamine. It's manic and wearyingly predictable, and as soon as it begins, you know exactly how it's going to end: with a hard, fast crash (and the requisite yakkety epilogue). There's been plenty written about what a smash-bang, seat-of-your-pants action film Unstoppable is, and those expectations brought in lots of viewers across the land. Certainly, the theatre I saw it in was packed to the gills, although while eavesdropping in the whisper stream on the way out, the general consensus, as much as I could decipher, was that it was either a) the best action movie ever made or b) pretty alright. That last came from a long-haul trucker from Sacramento, who sat behind me and kept up a politely quiet and impressively snarky running commentary throughout the film. For once, I owe the gabbers zero ill will. It must be said: T his gimme-hatted gear-jammer was immensely more entertaining than Scott's new film, which, if you haven't heard, is "based on true events" (highly adrenalized though they may be). Oh, but what a fun pitch meeting it must have been: "There's this unmanned train, see, powered up at full throttle, see, and it's headed toward population! And Denzel Washington plays a heroic motorman who recently lost his wife to cancer! And that new Captain Kirk guy's the rookie conductor who has a dying kid! – no, scratch that last bit – he's got a broken heart! How can it miss?!" How indeed? There's no denying that Scott's a master at fetishizing those massive, hulking, clanking, shrieking locomotives and their equally cacophonous freight yards – the Tonka kid in all of us will enjoy the heck out of that – but once the story commences, there's really nowhere much for it to go but straight to the end of the track. The script by Mark Bomback (Live Free or Die Hard) doesn't add a lick of originality to the rolling chaos and instead quotes every preordained passage in the Book of Badass Action. Apart from those monstrous trains, Dawson turns in the only interesting characterization in the film (and that itself is a riff of sorts on Washington's role in The Taking of Pelham 1 2 3). Unstoppable's runaway train premise is equalled in hollow, thudding bombast only by the faux Fox News snippets that provide unnecessary yet near-constant exposition along the way. Unstoppable is interminable, especially for connoisseurs of the action spectacle. They will recall with fondness such far better films as Runaway Train or even the old Sinatra chestnut Von Ryan's Express. Hey, at least that one threw in some Nazis for our heroes to contend with. Scott tosses the occasional foreign object onto the track from time to time, horse trailers and the like, but in the end Unstoppable is derailed by its own one-track premise. 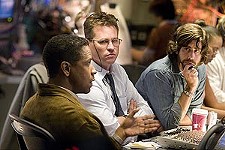 Déjà Vu
If the science fiction in Déjà Vu has more to do with fiction than science, it’s not as though this Denzel Washington picture ever pauses long enough for that realization to fully take hold.