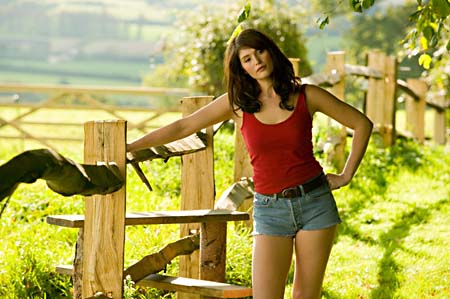 Do our movie characters have to be likable? Of course not. But they have to be interesting, at least. Tamara Drewe is neither. Based on Posy Simmonds' 2005 Guardian comic strip, itself a modern-day riff on Thomas Hardy's Far From the Madding Crowd, the Drewe loosed from the page couldn't have found a more comely corporeal body: She's played by the husky-voiced Arterton, contemporary cinema's sort of Our Lady of the Perpetual Coo (further evidenced in last summer's Prince of Persia and Clash of the Titans). Drewe is a self-absorbed celebrity journalist who reluctantly returns home to a hamlet in Dorset, England, where she intends to sell her recently deceased mother's home. That plan gets put off when Drewe becomes enmeshed in village life, which includes a neighboring farm/writers' retreat run by an overpuffed crime novelist, Nicholas Hardiment (Allam), and his put-upon wife, Beth (Greig). The film squashes together two English mainstays – the bedroom farce and the pastoral – for a thin comedy that never manages the antic bawdiness of the former or the bucolic charm of the latter. Frears, typically a very fine director of women (Dangerous Liaisons, The Grifters), can't seem to suss out anything but a zero in hot pants in his lead actress. But hold on. There is another movie quietly unfurling at the edge of the frame – one very little concerned with Tamara Drewe – and it is vastly more engaging than what takes place front and center. That one stars the wonderfully emotive Greig – who did right by antic and bawdy (also: alcoholic, near suicidal) in her supporting role on Channel Four's Black Books – and Camp, as a luckless Hardy scholar entrenched at Beth's writers' colony. Tamara Drewe's revolving affairs may be the film's raison d'être, but it plays like kids' stuff compared to their adult romancing – frumpy and halting and more true to life than the rest of the film's forced fancifulness.