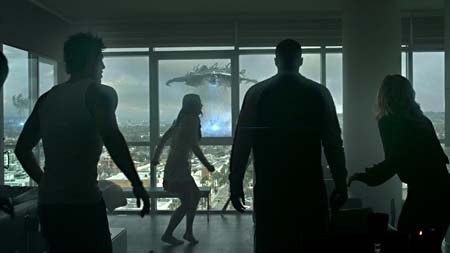 “Don’t go toward the light” is the advice given to patients trying to resist death’s embrace. The advice might also prove wise for the characters in Skyline, an effects-heavy thriller about an alien invasion of Los Angeles. I’d use the term "science fiction" to describe Skyline but the movie decidedly lacks both science and fiction. Skyline is directed by the self-billed Brothers Strause, the highly in-demand visual effects designers whose sole feature-length directing credit is 2007’s Aliens vs. Predator: Requiem. The effects in this new movie are, indeed, quite stunning. In the middle of the night, without warning, alien invaders descend on L.A. The creatures take various forms: One looks like an ugly, flying Venus flytrap with octopus tentacles, another walks on Earth with giant Godzilla-like legs, and all seem to emanate from a hovering mother ship and produce an eerie blue light that sucks humans into oblivion should they stare at it too long. That’s about all we ever learn about these space marauders, except, perhaps, for the icky coda in which the victims’ brains are sucked out of their bodies as if they are dime-a-dozen crawfish. Made on an estimated budget of $10 million, which is small potatoes for a good-looking effects film, Skyline demonstrates some of the wonders that can be accomplished on those terms. Whatever the budget, however, a greater amount of it should have been paid to a screenwriter instead of allowing scripting novices Joshua Cordes (the second unit director on Skyline) and Liam O'Donnell (one of the film’s many producers) handle the task. Skyline is the kind of movie in which the characters make so many dumb moves and repeat the same trite exclamations that audiences love to watch them in order to yell mocking comments back at the screen. For example: Why do the menfolk decide instantly to leave the confines of their safe high-rise apartment to go out and investigate the phenomenon before even switching on the TV or checking their Twitter feed for further information? How is it that these tentacled things can probe inside apartments for prey but are stymied by kitchen islands? And, once the air cavalry arrives, how are those drones able to engage in dogfights? Logical questions arrive with almost every new sequence. Most curious of all, however, is how the filmmakers could pass up the obvious joke opportunities about Angelenos being done in by their brainless inability to resist bright, shiny objects. Don’t make the same mistake: Don’t go toward the light. 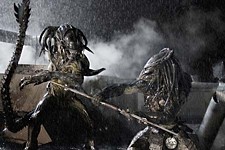