These days, everyone is talking smack about the United States economy. Most of us have painful evidence that the whole system is in the toilet, yet few can explain exactly how or why this debacle has come to pass and, moreover, what should be done to rectify the situation. Director Ferguson (No End in Sight), however, illuminates the situation with this detailed yet engaging documentary analysis, which is narrated by Matt Damon. Inside Job uncovers little that hasn’t already been reported elsewhere in other news outlets and publications, but Ferguson does an excellent job of gathering the material, organizing the presentation and history, and showcasing his clear-eyed perspective of the American people as the victims of academic and Wall Street insiders who are themselves victims of their own greed and inflated self-worth. Not that Ferguson evidences much sympathy for the rapacious masters of the universe, but he demonstrates how the past 30 years of economic policy have created a deregulated banking and monetary system in which the remaining watchdogs are bedfellows with the subjects of their oversight and whose academic analysts serve the interests of the system rather than the consumers. Inside Job is divided into five digestible sections: How We Got Here, the Bubble, the Crisis, Accountability, and Where We Are Now. The documentary begins in the Eighties with the Reagan administration’s deregulation of investment banks, the rise of Alan Greenspan, and the collapse of the savings-and-loan industry, and continues through the Internet bubble, the dismantling of laws that forbade the mergers of corporate giants, the development of computer technology that assists global expansion, the invention of financial derivatives based on ideas of money rather than tangible assets, the growing international interconnectedness of national monetary systems, and much more. Of necessity, there are a lot of talking heads in this documentary, but they are well-selected and well-spoken. Ferguson maintains a presence throughout, and we can often hear his incredulous follow-up questions to the interviewees and get a sense of his outrage over the laundry list of misdeeds he relates. It is his view that the financial-services industry needs to be held accountable for its abuses rather than being appointed and/or reinstated in government posts as the Obama administration has done with such culprits as Larry Summers, Tim Geithner, and Ben Bernanke. Ferguson’s provocative questioning is one of the greatest lessons of Inside Job. That and his demonstration that the current economic crisis is definitely not too difficult for us to understand – and correct. 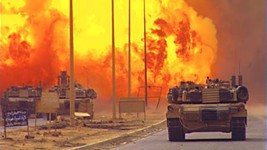 No End in Sight
If you're growing as weary of Iraq war documentaries as you are of the war itself, then this sobering, information-filled study of the war's origins is the film for you.