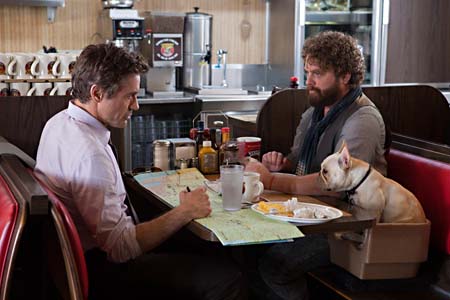 Due Date is the comedy delivered by director Phillips in between his breakout success as the director of last year’s The Hangover and its coming-soon-to-a-theatre-near-you sequel, which is already in production for a planned release in 2011. This palate-cleanser reunites Phillips with The Hangover’s Galifianakis, whose comic man-child schtick gets the fullest workout seen so far in any of this suddenly ubiquitous actor’s films. The film pairs Galifianakis with Downey Jr. for a Planes, Trains & Automobiles-style road trip. Galifianakis plays Ethan Tremblay, the gauche and rotund John Candy of the duo, against Downey Jr.’s Peter Highman, the urbane Steve Martin character, who is just trying to make it home to Los Angeles in time for the birth of his first child. Missing, however, are the gooey John Hughes sentiments of PTA. Instead (and to its benefit), Due Date favors a more misanthropic tone that permits little character redemption or forced bonhomie. Phillips, by now, is an old pro at the road-trip movie and steers his characters through a wicked variety of set-pieces, which also offers an opportunity for the filmmaker to engage in another of his now-signature strategies: celebrity guest cameos. In addition to the single-sequence appearances by Lewis, McBride, RZA, and Walsh, Phillips also casts Foxx in a small role and uses the TV show Two and a Half Men as a delicious (and unexpectedly topical) running gag. The problem with Due Date is that, although the film is funny, it is less funny at 95 minutes than it is in its succinct advertising trailers. Downey Jr. and Galifianakis display perfect timing with their rapid-fire delivery, but the jokes don’t build propulsively from one to the next and keep the audience awash in a constant and contagious gale of laughter. In between the jokes, some of the darker moments of Due Date emerge and deflate some of the froth. Indeed, the darker bits make Due Date a more original film, but they do not make it a funnier one. They also allow the viewer more time to consider the film’s serious lapses in narrative believability (e.g., Peter’s wife is delivering via a scheduled C-section, thus the due date of the title is an arbitrary deadline; the escape from a Mexican border crossing and continued journey in a Mexican police vehicle that’s missing a passenger-side door is implausible). Nevertheless, in its best moments, the film’s duo of Galifianakis and Downey Jr. remind us of a bickering Laurel & Hardy digging themselves out of another fine mess. And we’re happy to be along for the ride.