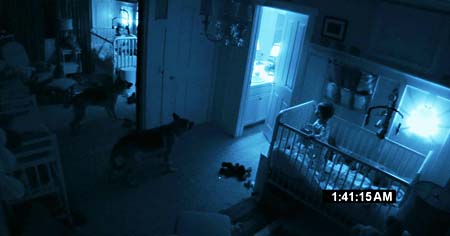 Believe the hype: Paranormal Activity 2 is exactly what you think or hope it is but no more and no less. I loathed the first film, but its cheap shocks and wait … wait … wait … gotchas were a box-office cash machine that could not be ignored. C'est la mort, yeah? Paranormal Activity 2 is something of a prequel to Oren Peli's initial film. That means there's another sequel in the works and – you can bet your afterlife on it – this is going to be the most lucrative genre franchise since the Scary Movie movies, or possibly the Saw films. Either way, it's a sure sign that the porous rules and tropes of reality TV have taken over reality, and that's never a good thing. But, most importantly, does it scare the hell out of you? Well, yes, it does, but only in the same way that a sudden draft of wind does, when it slams an unexpected door on the cat. As it turns out (and we're not giving anything away here), the new pair of victims, Kristi and Dan (Grayden and Boland, both of whom do exactly what they need to do), are related to the previous couple by blood ties. Plus, they have a child and a German shepherd in tow. It's not enough. It's unlikely that anyone who did not see the first film will want to see Paranormal Activity 2. The entire production is faux cinema verité, captured remarkably via security apparatus and nanny cams. That's the pitch, really: Supernatural stuff happens, and the audience gets to view it in edited real time. Granted, this inevitable follow-up is considerably spookier than its predecessor but only in terms of the amount of jump-out-of-your-seatiness and the fact that there's a new set, with matching suburban-tacky furniture. It's not hell, but it's close. 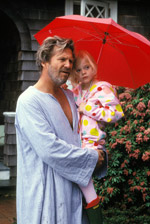 The Door in the Floor
Jeff Bridges shines in this new adapatation of a John Irving work.