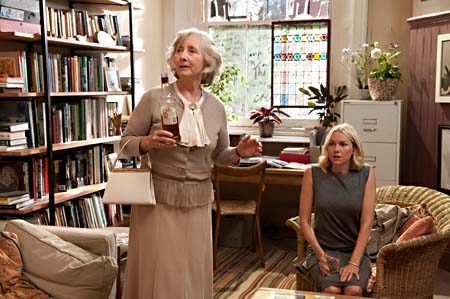 You Will Meet a Tall Dark Stranger

Allen gives the best bits – two, by my count – to the only underclass characters in his latest romantic roundelay, You Will Meet a Tall Dark Stranger. In the first, a pragmatic fortuneteller named Cristal (Collins) is at her sink, doing the dishes, while her client, a senior-aged divorcée named Helena (Jones), pours another scotch – on the clock – and weeps about her ex-husband Alfie (Hopkins), who dropped her because, in his own chilling estimation, Helena let herself get old. Later, we see Alfie’s nubile new bride, Charmaine (Punch), a reformed hooker, rather majestically wiggle her ass at a dance club. They are the dreammakers; less charitably, you could call them both charlatans. They’re also the only full-blooded characters in a sea of anemics. Is it London that makes everyone so wan? Libido ostensibly drives them all – Alfie to ditch wife No. 1 and get fit, his daughter Sally (Watts) to make eyes at her art-gallery-owning boss (Banderas), and Sally’s failed novelist husband, Roy (Brolin, boorish and frankly unbearable), to court their comely neighbor (Pinto) – but it’s a weirdly inert kind of libido. (Brolin can barely move under the weight of his comically bad bush of hair.) In theory, there are some interesting ideas burbling here: How disaffection pushes these characters to marinate in drink; how they “solve” their simplest problems by making even more; how they assiduously avoid truth-telling to avoid confrontation, only to be confronted with the inevitable fallout of so many lies. In theory, yes. But in practice, and played as farce, the characters are one-dimensional cutouts kept at a dogged remove. Their miseries are a bore – maybe to Allen, too, who abruptly ends the film, after so much inaction, when it finally catches some dramatic traction. Still, who can blame him? I know I couldn’t get away from these shrill, complaining people fast enough.