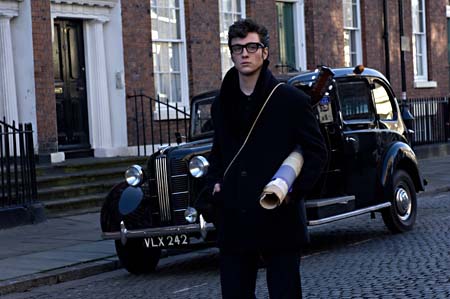 Before John Lennon emerged as an adult Beatle who went on to pen tunes such as "Nowhere Man," the lad was a Fifties teen with parentage issues – a real "nowhere boy," as this movie would have it. As with most aspects of Beatles arcana, the subject of Lennon's tangled upbringing has been turned over by scholars, psychologists, and merchandisers throughout the decades. This movie about Lennon's young-adult years prior to the success of the Beatles uncovers no new dimensions regarding the musician's parental issues (he was raised by an aunt and uncle who substituted as guardians of the boy when his biological parents proved unable – long story there). In fact, if anything, Nowhere Boy glosses over some of the messy personal backstories in favor of dramatic cohesion, which the film achieves quite gracefully. Nowhere Boy is an evocative telling of Lennon’s early years, a depiction all the more remarkable for Johnson’s lack of resemblance to the film’s biographical subject. Artist-turned-filmmaker Taylor-Wood captures the spirit of a restless teen in love with rock & roll in this film loosely based on the memoir written by Lennon’s half-sister Julia Baird. Yet anyone who has listened to Lennon’s intensely autobiographical songwriting, especially from his post-Beatles years, may find Nowhere Boy more redundant than revelatory. Furthermore, anyone who has heard Lennon’s primal screams from the initial release of his song “Mother” ("Mother, you had me but I never had you.”) knows that a live-action re-enactment could only detail some of the reasons for Lennon’s abandonment issues but never match the degree of pain that he transmitted with those recorded guttural wails. Released amid the flood of material honoring what would have been Lennon’s 70th birthday on Oct. 9, Nowhere Boy is timed for maximum exposure, a strategy that might not benefit the film as much as the distributor hopes. It lends the film the slight whiff of carpetbagging, as if the film were not strong enough to stand on its own, which is untrue. The performances are what really put this biopic over the top and clarify the importance of these strong women in Lennon’s early life, perhaps laying the groundwork for his later gravitation toward feminist ideals. Scott Thomas plays Lennon’s Aunt Mimi, who steers the boy’s upbringing with pursed lips and bourgeois discipline – a loving but undemonstrative parent. In contrast, Lennon’s mom, Julia (Duff), is a free-spirited bohemian with a new family, a bit unbalanced mentally but emotionally open. It is she who reveals to her son that the real meaning of rock & roll is sex and the scenes between the pair are tinged with a slight sexual undercurrent. Nowhere Boy reveals the magnitude of the good women behind the grand icon. 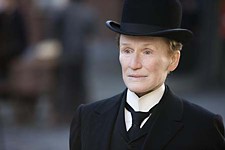 Albert Nobbs
This melancholy picture is distinguished by Glenn Close's vanishing act in the titular role.