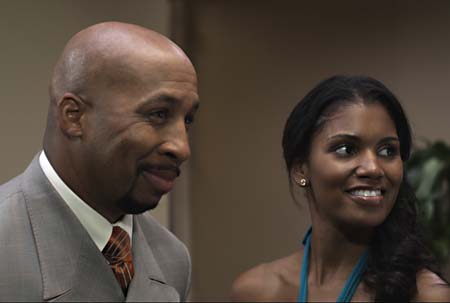 If Tyler Perry were to move his filming operation from Atlanta to Memphis and ratchet up his ensemble dramas to the level of melodramatic hysteria while also disrupting the narrative flow with unnecessary details and erratic scene changes, the result might be something like N-Secure, the story of an obsessive tyrant and the women who suffer his abuse. Set amid the well-to-do urban denizens of Memphis, this indie film tries hard and seemingly means well but fails to hit the mark, even though it cribs many of its actors from various Perry movies. David Washington (Moore) is a successful executive whose obsession with promptness causes him to berate his secretary, Denise (Trucks), and live-in girlfriend, Robin Joyner (Atkins), whenever he regards them as lagging. He is a martinet in his home, subjecting shelves to white-glove tests and timing his morning ablutions to the second. Robin endures his fanaticism because the life he offers her is so much better than the low-rent experiences of her past. Then the night before their wedding, Robin can’t resist the sex appeal of the fiancé (Rucker) of her best girlfriend (Bledsoe, best known as Vanessa on The Cosby Show). Caught in the act, Robin is banished from David’s home, but he recovers well enough to immediately find another woman, Tina (Boutte), to take on his honeymoon vacation. Before long, he torments Tina with his jealousy and peccadillos, though she puts up with them far longer than most audiences are likely to indulge. Scattershot storylines appear and disappear with regularity. An old buddy from the Marines pops in for a scene and reinforces our sense of David as a strict disciplinarian who also suffers from distinct daddy issues. Friendships unravel, crimes are committed, paternity tests are scuttled, and so on. David’s villainy is almost comical in its extremity and completely unbelievable. By the time the character gets his comeuppance, we are well ready to be rid of the jerk, and there is little satisfaction in the way his justice is delivered. N-Secure is a disjointed assemblage of scenes that still manages to roll down the track while never picking up a head of steam.