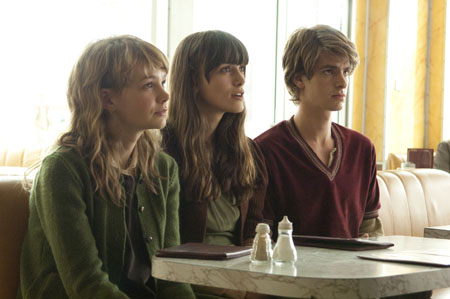 Early reactions to this filmed adaptation of Kazuo Ishiguro’s undeniably under-the-skin but a mite overpraised Never Let Me Go seemed to share the same basic – very American, I think – complaint (and you should stop reading now if you’d like the film’s central mystery to be kept just that): Why didn’t they fight back? But I think that misses the rather crucial point that this is a British film: made by, set in, inspired by, all that. The British children highlighted in the opening scene of the film, set at a remote school called Hailsham, could be mistaken for those wonderfully distinctive children seen in the intro to the Up series – same-clad, cable-knit kids toiling through school but unique in face and temperament. That singularity is significant, because the Hailsham students have been born into a system that values them for their parts, not their discrete personalities, and certainly not for anything so indefinable – or irrefutable – as a soul. Early on – and again, massive spoiler alert – we learn that the raison d’être of these children, all clones, is to keep themselves “healthy inside,” because once they achieve maturation, their parts will be harvested in a series of “donations.” The Hailsham student body, then, is living with an expiration date fixed sooner than most. What was better defined in the book was how gradually that knowledge dawned on the children – how a fact could seep so insidiously as to become simply a fact of life, even if it signaled death. A movie, alas, must move faster and with less finesse: Here, that fact is dropped like a bomb (hence American critics, with their native rebellious streak, crying foul), but still, these well-trained children take the news and soldier on – so very British. In their later bloom, aging ever closer to donation, they are portrayed by a forceful triumverate of British actors: Oscar nominee Mulligan (An Education) – tight-lipped and watchful – plays Kathy; Knightley is the bullying but magnetic Ruth; and The Social Network’s Garfield, gangly and halting, is Tommy, a once-raging child who as a man has not yet found his voice. (They all do worthy work with largely uncommunicative characters, but it’s Knightley, with her slow waking to bitterness, who stuns in a secondary role.) Much of the nuance of the book has been disappointingly, if perhaps inevitably, stripped from the film; what remains is a more conventionally relayed love triangle. Romanek (One Hour Photo) wisely doesn’t play this as a sci-fi story – it never was – but he also doesn’t lean hard enough on the philosophic underpinnings of the piece, especially in the crucial disparity between how the world at large views the donors and how the donors view themselves. (The film’s climax is so delicate it would wisp away if you weren’t pricking your ears; frankly, screenwriter Alex Garland, of The Beach and Sunshine, has never been much of a closer.) Romanek, alas, doesn’t lean too hard on anything, save the muted colorscape: The subdued characters I can abide, intellectually speaking, but subdued filmmaking with material this fundamentally gut-punching is a lot less easy to swallow. 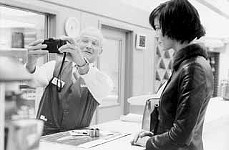 One Hour Photo
One Hour Photo offers a very interesting snapshot of some decidedly modern pathologies -- suburban alienation and the illusions generated by the advent of the ...