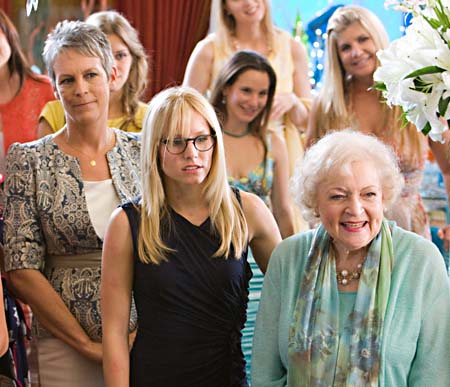 Bell is an appealingly tart, wheels-always-turning kind of actress, and someday (fingers crossed) she’ll find a film role that suits her as well as her star turn as a snappy peewee private eye on TV’s Veronica Mars did. We get sparks of the same Veronica spitfire here, and she has a hell of a pratfall into mud that makes one long for a director who knows how to harness her innate screwball physicality. Only sparks, though, and never enough to set off any alarms. Bell plays Marni, a former high school loser who, in adult life, has remade herself as a successful and put-together public relations exec. That reinvention is threatened, however, when she returns home to discover her big brother (Lone Star’s Wolk) is about to wed her high school nemesis, Joanna (Yustman, a pretty, screechy-pitched zero). In flashback, Bell fearlessly plumbs the depths of high school degradation in full-on brace-face, and the other actors – including the underused Curtis and Weaver, as former high school nemeses similarly forced to reunite – are just as game to get physical, even if the film, so relentlessly been-there, done-that, has only half their stamina. Almost as an afterthought, You Again poses an interesting question – what if our long-ago bullies were just as psychically scarred by the tormenting as their tormented victims were? – but that curveball is buried under a lot of gunk: dance-offs, sing-alongs, awkward exes, and a dirty-talking White blasting through, I’m afraid, the last bits of her novelty. That again?