Legend of the Guardians: The Owls of Ga'Hoole

Maybe prior familiarity with Kathryn Lasky’s young adult book series, the first three volumes of which are condensed into this animated movie, would help overall comprehension. Starting with the impossible-to-remember title, this film is better off dubbed “that owl movie” in honor of its most distinguishing characteristic. Yet it’s a dubious distinction, as someone should have foreseen the fact that it would take an ornithologist to detect the minute differences among the film’s numerous bird faces. Swooping and soaring through their many action and battle sequences, the owls are often reduced to a mass of ruffled feathers, making it hard to take a rooting interest or follow the details of the plot, of which there are many. Snyder, the director of action films with such streamlined titles as Watchmen and 300, assembles top British and Australian actors for the vocal talent, but Legend of the Guardians seems to be more about talons than talent. The story takes place in a predatory world in which two young owlets, to whom we’re introduced in the opening sequence, are kidnapped by bigger owls and carried off to the dark world of the Pure Ones to do their nefarious bidding. The smallest owls are condemned to forced labor in an operation that seems like a concentration camp or a vision from the workers’ hell in Metropolis. The others are trained as warriors. The Pure Ones have some kind of plan for avian world domination, while the owls of Ga’Hoole fight back against evil. Lives are snuffed out and sacrificed with regularity and the film maintains an extremely dark tone throughout. Adults thinking about taking their little ones to this PG-rated film should consider whether the kiddies are ready to witness the harsh and vulturous world of Legend of the Guardians. Rendered in 3-D, the film’s scenes of flight are often breathtaking, as is the animation as a whole. But the sketchy visual traits that differentiate the many characters in this avian universe will leave viewers crying “who, who” along with the owls. 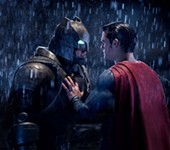 Legend of the Guardians: The Owls of Ga'Hoole, Zack Snyder