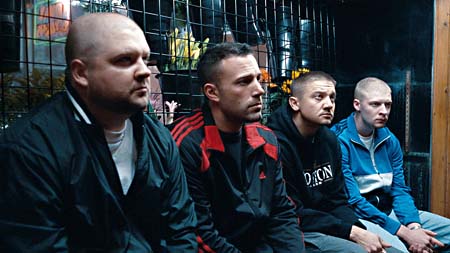 Ben Affleck touches down again in his hometown, Boston, for his second time behind the camera, following 2007’s well-received Gone Baby Gone. The title’s town isn’t blue-blood Cambridge or scrappy South Boston, but rather Charlestown, a kill-or-be-killed stretch of land notorious for hatching bank robbers like chickens do eggs. Ingrained violence and OxyContin addiction are casual facts in Charlestown, but Doug MacRay (Affleck) is trying to leave both behind. His startling leanness and muscularity feel true to a recovering addict channeling his obsessive nature into other outlets. Another outlet is knocking over banks. Doug runs a crew with his childhood friend James (Renner, scary and rabid), and in a tight, fierce opening sequence, we see just how good – how professional and ruthless – these men are at their jobs. In that same sequence, Doug meets a woman named Claire (Hall) and, through her, begins to imagine the possibilities of a life outside of Charlestown. Affleck is affecting as the quiet-spoken, conflicted tough guy, but it’s in his scenes with Hall that he catches your breath. Voice barely above a murmur, he’ll slide into a slightly goofy smile, and it’s like a double exposure – the once-husky boy who turned to self-effacing jokes to get the girl, ghosting on the hard cheekbones and chiseled body of a leading man. It’s an aching, vulnerable performance, and the tenderness of Affleck and Hall’s scenes together elevate the routineness of the one-last-job-and-I’m-out plot. Mad Men’s Hamm, his handsomeness slackening with fatigue, plays an FBI agent closing in on Doug’s crew; I’m not sure his additional perspective benefits the film. The action is the stuff of locked-jaw suspense, but a feeling of inevitability hangs over the film without any tempering tragic weight. There are good guys we don’t care much about and bad guys that we do and even badder guys we’re supposed to hate. But on the sliding scale of culpability, everybody’s just a few clicks away from the next guy. Most of the film embraces that moral ambiguity, but the climax – a well-staged series of calamities – and its sunset coda unsettlingly whitewash that prior complexity. 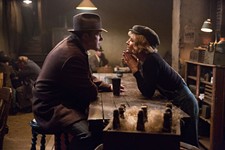