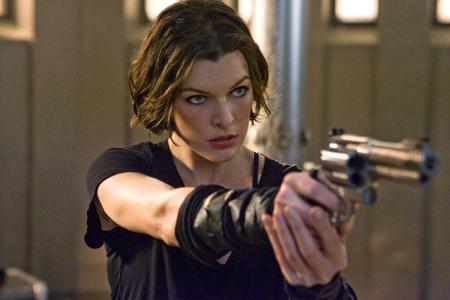 It pains me to say it, but Afterlife, the latest installment in this seemingly eternal zombie apocalypse franchise, is considerably more entertaining than George A. Romero's most recent exhumation. As in Survival of the Dead, the herky-jerky stiffs seem like a narrative afterthought, tacked on because they're expected by precedent. In both films the dead play second funereal fiddle to the living, but at least Anderson's schlocky living includes Jovovich and the hilariously hamtastic Roberts (doing his very best "Val Kilmer as Hugo Weaving as Agent Smith in The Matrix" impersonation). Compared to the epic bummer of Romero's patently nihilistic and increasingly, depressingly accurate critiques of mankind, Resident Evil: Afterlife is a breath of fresh air. Well, not that fresh, but presumably fresher than the darkened and reeking garret in which most of the original otaku fans of Capcom's mid-Nineties video game exist. Granted, gamers – like film critics – have come to depend on the work of director Anderson to offer up semiannual mediocrities that, somehow, still manage to entertain. I, for one, have come to appreciate Anderson's bizarre casting choices, arrhythmic pacing, and stilted dialogue as a necessary – no pun intended – evil. Resident Evil is 21st century popcorn fun, perfect for rainy Saturday afternoons but not much else. That said, Afterlife is a cut above its predecessors, thanks in large part to the vast amount of time the cameras spend focused on Jovovich as she dodges bullets in slow motion and mows down snarling mutant mastiffs and nail-studded behemoths with overgrown meat tenderizers. The plot? Does it matter? Alice (Jovovich), the bio-engineered savior of humanity, goes up against the evil Umbrella Corporation and looks damn good doing it. And that's all you really need to know, apart from the (pointedly obvious) fact that, yes, like hurricanes and human rights abuses, there will be another Resident Evil within the next 36 months. Anderson tags a virtual trailer for that one onto the end of this one just so you won't forget and move on up to Red Dead Redemption.