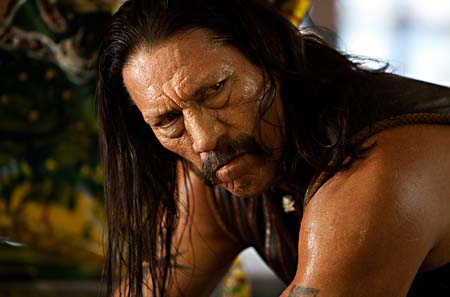 Machete is a movie that has been a long time coming, which gives this so-called Mexploitation film an extra kick now that its arrival coincides with a political climate in America that enhances its topicality. This revenge film’s roots go back to Rodriguez’s first employment of Trejo, the titular Machete, in the 1995 film Desperado. We then developed a mouthwatering taste for Machete when it appeared as one of the fake trailers sandwiched in between Rodriguez's and Quentin Tarantino’s halves of the B-movie throwback Grindhouse. It was one of the takeaway images from Grindhouse: Trejo as a wronged federale who is cloaked with nearly as many knives as a bird has feathers, a frightening visage, and that ominous tagline about having “fucked with the wrong Mexican.” A veteran actor who has appeared in nearly 200 Hollywood movies and a scary-looking survivor of San Quentin, Trejo is an unlikely candidate for the role of the newest superhero in filmdom. But there you have it: Rodriguez and co-director Maniquis have turned this Mexican-American with the fearsome face into the new Charles Bronson, and as Machete, Trejo has struck the mother lode of badass. Like in Bronson's Death Wish movies, the plot kicks off when Machete is double-crossed in Mexico and witnesses the gruesome murder of his wife and daughter by drug kingpin Torrez (Seagal). Three years later we pick up his trail as a day laborer in Texas, where a rabid anti-immigration movement is in full flourish, seen primarily in the personages of a shoot-to-kill vigilante (Johnson) and De Niro’s Senator McLaughlin, a racist who advocates for an electrified border fence. Things are no different for Machete on the American side of the border with corrupt politicians in cahoots with even more corrupt drug runners. The film piles on a host of entertaining characters, all of which are one-note caricatures that nevertheless serve the purposes of the film’s full-blast trajectory. (De Niro does some of his best supporting work in years, and Lohan’s appearance as a rich little druggie who schemes to increase her Web presence could not be more fortuitously timed.) The film’s ultraviolence is leavened by its humorous and creative edge. Yes, the violence and the ogling of women’s bodies are gratuitous and over-the-top, but the film’s self-awareness and the respect it has for its Seventies exploitation forebears keeps Machete from going over to the dark side. It’s a far cry from the nonsensical mayhem that marked Rodriguez’s Planet Terror. Also in keeping with the exploitation aesthetic is this film’s intrinsic incorporation of topical issues: in this case, border tensions. Machete doesn’t probe any intricacies or offer solutions, yet keeps the issue on a front burner throughout. “We didn’t cross the border; the border crossed us” is typical Rodriguez (who wrote the script with his cousin Álvaro Rodriguez) sloganeering. In the end, Machete may not be all that original, but it is fresh – fresh as a steel blade to the gut.