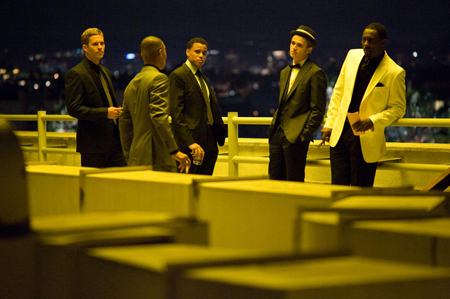 The problem with Takers, a routine, patchily engaging heist thriller, is that it takes and it takes and it takes. It takes itself way too seriously – director Luessenhop seems to think he's assembled a sort of hip-hop Heat, even aping Michael Mann's fondness for cool color palettes. Like Heat, the L.A.-based Takers takes great pains to split the narrative and audience sympathies between cops and robbers alike. Dillon, grimacing so hard I was afraid he might hurt himself, plays a down-on-his-luck detective trying to figure out who engineered a thrilling midday bank heist. The audience knows, of course – the opening minutes detail the job done by The Wire's Elba and his crew, including the terrific Ealy (Sleeper Cell) and producers/performers Brown and T.I. – but it takes a good long while before any of these robbers' names or personalities emerge. Pity: The cops are a bore, but the robbers have an easygoing chemistry with one another. (And Luessenhop has helpfully distinguished the team's two white boys – Walker and Christensen – for audiences by smashing a porkpie hat on top of the Boy Who Would Be Vader.) It takes its time getting there, but Takers has a nice-riding middle section as the team plans its next big heist (it's a doozy). But it runs the stopwatch on a chase sequence to a comical extreme and takes way, way too long to take its final bow, in the process burning off any residual good will. 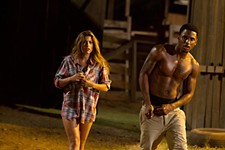 Texas Chainsaw
Decades after the original, this story about the deranged, backwoods cannibal with a power tool still has legs – and extra 3-D torque.