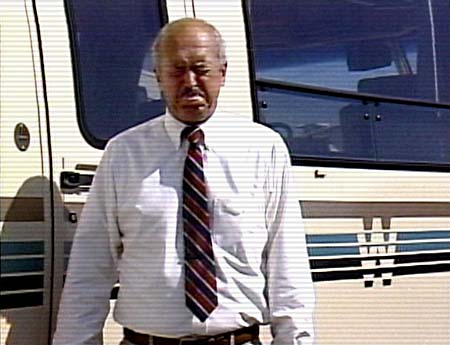 Cast aside any preconceived expectations you might have regarding this documentary and remember simply this: Winnebago Man is one of the best films you’re going to see all year. Though its structure is familiar and the object of its attention is a routine filmmaking choice, the places the film takes the viewer and its subject – Jack Rebney, the so-called Winnebago Man – are unexpected and surprisingly satisfying. Indeed, this evolutionary process becomes the film’s subject matter rather than any biographical portrait or story of quest fulfillment that we might have expected at the film’s beginning. Certainly, we are all familiar with the recent trend in documentary filmmaking which privileges kookiness or obsession as reason enough to catapult various individuals into the category of entertaining subject matter. Yet as this type of film grows in quantity, the quality, insight, and active participation of the filmmakers seem to diminish in equal measure. At its best, the form gives us a new appreciation of the weirdos in our midst; at its worst, it has fed into our modern-day schadenfreude in which we derive enjoyment from the peculiarities or humiliation of others. If you come to Winnebago Man with previous knowledge of Rebney and his underground notoriety, you’ll anticipate learning more about this human being frequently dubbed the “Angriest Man in the World” due to the hilarious outtakes in circulation of Rebney cursing his way through a Winnebago industrial video. Rebney knocks out expletives with the force of a home-run hitter and the panache of an exacting individualist and self-styled humorist. These outtakes were passed from VCR to VCR until the era of YouTube took what was already a viral sensation and turned the Winnebago Man into a pandemic. Rebney’s tirades have always held a special appeal for filmmakers who empathize with his frustration with production delays and mistakes. Rebney’s rants also contain a self-denigrating aspect that makes them relatable to anyone in need of a good, long, expletive-laden outburst. (“My mind is just a piece of shit this morning” is one of his more popular catchphrases.) Still, no one knew where the actual Jack Rebney was until first-time feature filmmaker Steinbauer tracked him to the top of the California mountain where Rebney lived as rather a hermit, with no idea that he was the star of one of the most-watched videos in the world. The dance that follows between Steinbauer, as his grip on the film he thought he was going to make gradually slips, and Rebney, as his gruff disdain for society fades when he realizes Steinbauer’s film could be his opportunity to share his hatred of Dick Cheney with the public, becomes the film’s continuing thread. Austin-based Steinbauer’s film premiered at the South by Southwest Film Festival ’09 with Rebney in attendance, and the near-blind, near-80-year-old Rebney attended. There was no doubt in my mind that the “angriest man in the world” derived pleasure from the act of bringing pleasure to others. Both the man and the film had reached outcomes that no one could have foreseen. (Steinbauer will be in attendance at the Friday and Saturday screenings. See "Happy Accidents," Aug. 20, for an interview with Steinbauer and Rebney.)