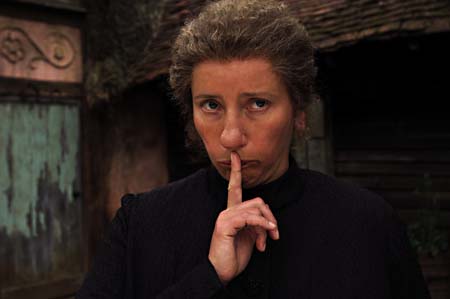 Oh, for the days of British nannies who could calm unruly children with a flying umbrella or magical walking stick like this McPhee dame. In this second installment of films based on characters created in Christianna Brand’s Nurse Matilda books, Thompson again stars as the story’s titular nanny. She also shepherded the project into production as the film’s screenwriter (working solo this time). Although set in World War II-era England, no specific war is named as the members of the Green family struggle to keep up their farm while their father and husband is off in battle. The bedraggled wife and mom (Gyllenhaal) receives an unexpected assist from Nanny McPhee when her refined niece and nephew come from the city to join her brood of three at the farm and instant chaos erupts. Explaining that’s she’s been deployed by the army, this strange-looking interloper needs no further credentials. With her black, floor-length garb; snaggletooth; facial moles; and bulbous nose, Nanny McPhee brings order and cooperation to the household with a tap of her walking stick. Her magic also can make goats and baby elephants appear as bedmates and cause pigs to fly and perform synchronized swimming routines. The film’s humor is designed to work for both kids and adults, and even if the film seems a little old-fashioned in its family-entertainment goals, there are plenty of modern-day poop jokes as the muddy farm generates torrents of animal excrement and a gaseous bird becomes the source of a climactic wind gust. (Even the illustrious Smith partakes in a doozy of a cowpat joke.) Nevertheless, the film may appear dated and a bit foreign to American children (at least judging by the lackluster response of the audience I watched it with). Ifans is a pure comic delight as Phil, the scheming but hilarious wastrel brother-in-law of Mrs. Green. Ifans’ brilliant clowning throughout makes the one-scene appearances of both Fiennes and McGregor seem more like stunt casting. Gyllenhaal demonstrates her range, as her sunny British mum contrasts with the roles as junkies and masochistic secretaries that also appear in her résumé. For American children, Nanny McPhee Returns may seem something like a foreign film, but the movie has enough spoonfuls of sugar to make the Britishisms go down. 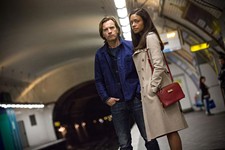