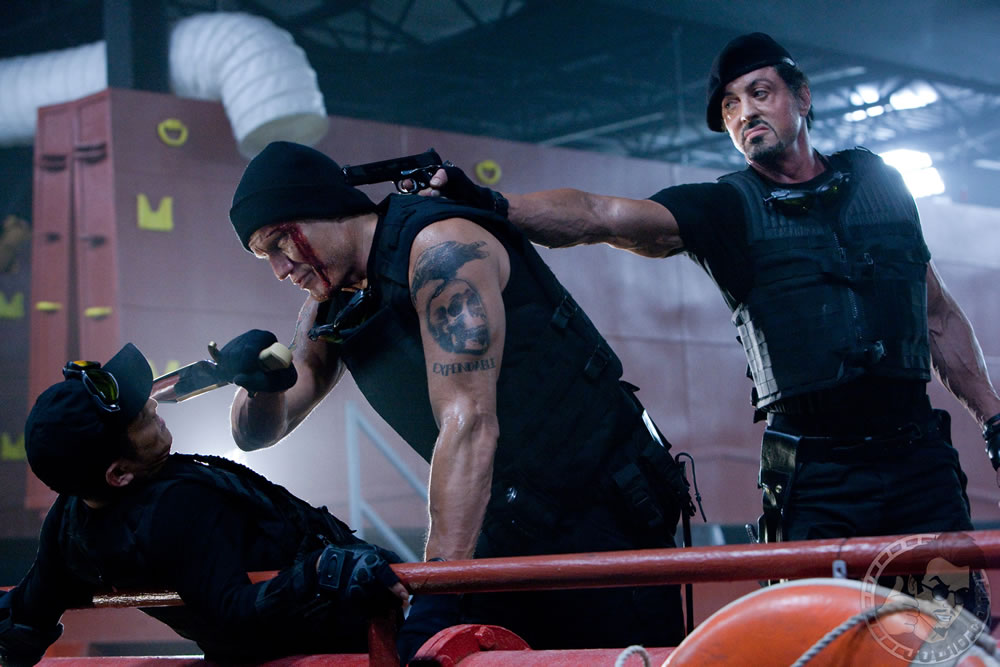 Big. Dumb. Fun. That about sums up this clash with the titans of action cinema, which pits Stallone and his team of aging mercenaries against ex-CIA baddie James Munroe (Roberts) and Generalisimo Garza (Zayas) of the tiny banana – wait, make that coca – republic. Ostensibly hired by the white-suited Mr. Church (Bruce Willis, cameoing) to take out the general, the Expendables – Lee Christmas (Statham), Yin Yang (Li), Gunner Jensen (Lundgren), Toll Road (Couture), Hale Caesar (Crews), and ex-Expendable Tool (Rourke) – instead find themselves on a mission from god, because, you know, god is love, and Barney Ross (Stallone) has fallen for the general's comely, yanqui-go-home daughter (Itié). There's some backstory from Tool, who gets a juicy monologue explaining his battle-hardened soul, and you could argue that The Expendables is really about bad men seeking sweet moral redemption. But that's bullshit: The Expendables is about explosions, guns, serpentine male veins pumped full of human growth hormone, a seriously kickass airplane, old-school rock & roll, motorcycles, and enough machismo and splattery testosterone to make the Pamplona bulls turn tail and run the other way. The idea of the film – a passel of the big action stars of Eighties and Nineties together in one totally over-the-top picture – is way more exciting that the actual film itself. Much of the the problem rests with Dave Callaham and Stallone's script, which feels thrown together and weary. It's not that The Expendables fails to deliver the goods. The film is a minefield of high-octane action set-pieces, although an unfortunate overreliance on CGI bullet hits and assorted goregasms consistently fails to thrill. (Seriously, effects people, bring back the condom squibs. I realize they're a mess and require frequent reshoots, but CGI blood spatter just doesn't work – yet.) Featuring nonstop action, Stallone and Callaham's writing doesn't set up these characters all that well. Are they ex-military, ex-assassins, or what? There's an argument to be made that it really doesn't matter who these trigger-happy clowns are, that that isn't what the film is about. But when I think of recent action-centric movies that have blown me away – District 13: Ultimatum; the Crank series; The Good, the Bad, the Weird; and to a lesser extent The A-Team – and compare them to this tag-team mash-up, The Expendables feels less like high-concept filmmaking and more like wishful thinking. There's just not that much adrenaline coursing through the audience, although, yes, sure, it's predictably cool to see all these Übermenschen kicking ass and taking names and generally having a grand old time with the pyrotechnics. But The Expendables doesn't come remotely close to eliciting the exhilarating, giddy highs of Die Hard, First Blood, or even Universal Soldier. It's big, it's loud, it's dumb, and all things considered, it's not completely unfun. But you could say the same about The Last Boy Scout and Harley Davidson and the Marlboro Man. 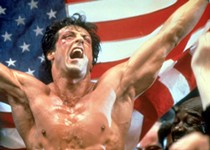 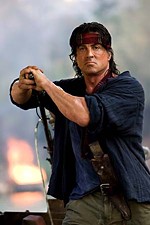 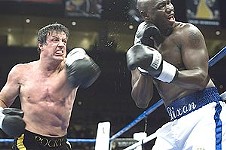 Rocky Balboa
This final chapter in the Rocky saga is terrific – maybe not great, like that first kiss of fist in ’76, but good, solid, exhilarating entertainment of the stand-up-and-cheer variety.