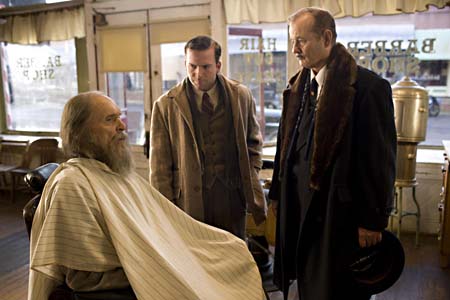 You need only see Get Low for absolute proof that, while Hollywood may be in decline even as bad actors’ salaries climb ever higher, there remain at least three very exemplary reasons – Duvall, Spacek, and Murray – to switch off your home theatre and get out into a real one. Set in Depression-era backwoods Tennessee, Get Low begins and ends with a crotchety, shotgun-wielding misanthrope by the name of Felix Bush, who has erected a "No Damn Trespassers" sign on the edge of his forest-shrouded property. This oak-hewed unwelcome mat is, like Bush, weathered yet sturdy and carries with it a hint of menace. It's a sign that Bush is not to be taken lightly, or consequences will ensue. And because he's played by Duvall (effortlessly, flawlessly), those consequences are compelling and dramatically irresistible; Bush is the kind of mysterious character who makes you wonder: What next? Next, actually, is the arrangement of his funeral. Bush, who has lived the past 40 years alone in the woods – and, thereby, has become something of a town boogeyman along the lines of an elder Boo Radley – is old, alone, and suffering from some ailment (we know not what) that will likely lay him permanently low, and soon. So he hitches up his mule and buggy and rides into town to visit a reverend (McRaney), hoping to arrange his own funeral. Not only that, he'd just as soon have it before he dies, with all the gossiping townsfolk invited: "I want everyone who has a story about me to come and tell it," he haltingly explains to the preacher, who, flummoxed, declines his services. Enter Frank Quinn (Murray), the whiskey-snorting owner of the local funeral parlor, and his understudy, Buddy Robinson (Black). Played with hound-dog eyes and a savvy sort of gallows humor by Murray (this may be his best role since Lost in Translation), Quinn smells a business opportunity in Bush's bizarre request and thick roll of wadded-up bills, and the two seal the deal. Preparations are made, including an attempt to elicit the services of the Rev. Charlie Jackson (Cobbs), an old friend of Bush's who is privy to the old man's dark secret. And then there's the return to town of the widowed Mattie Darrow (Spacek, bringing a touch of prim femininity to what is essentially a very male movie). Bush has his reasons for wanting to hold his funeral before he dies: Confession, redemption, and forgiveness are high on his list of priorities. Duvall and Spacek give two of their finer performances here – at this stage of his career you could watch Duvall mow the lawn and be transfixed and enraptured – but Get Low comes to life most of all when the deadpan Murray is onscreen. He plays Quinn with a semi-shady, very wry underpinning of emotional solitude. Spacek's presence is no less formidable – she is the key to Bush’s mystery. Photographed to period perfection by David Boyd, Get Low is unlike any other film I've seen this year. Director Schneider won an Oscar for his short film “Two Soldiers” (based on the William Faulkner story) in 2004. This is his debut feature, and it's a doozy, sweet and strange in equal measure, Faulknerian in its own right, and just about perfect.