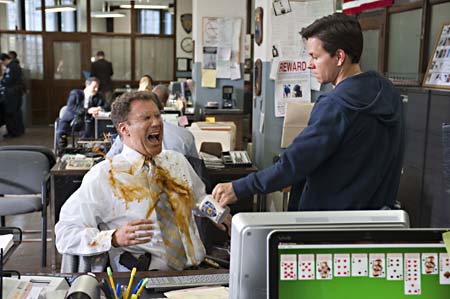 Reeling himself back in from the career crash-zone territory of Land of the Lost, Ferrell returns to more familiar stomping grounds with this fourth comedy re-pairing with director McKay (Anchorman: The Legend of Ron Burgundy, Talladega Nights: The Ballad of Ricky Bobby, and Step Brothers). Again, Ferrell plays a big boob, although his Detective Allen Gamble in The Other Guys is not as clueless or as extreme a doofus as his characters in these previous movies. Gamble is an NYPD forensic accountant who loves his desk job. His resentful partner, Terry Hoitz (Wahlberg), has been reassigned to desk duty following an embarrassing incident that not only wounded his pride but also left him with the stinging sobriquet "The Yankee Clipper." Rising to the challenge of playing straight man to Ferrell’s flights of fancy, Wahlberg also embellishes the character with some choice comic bits of his own. This is not the textbook cop he portrayed in either The Departed or We Own the Night. Nor is he playing the comic relief with the drop-dead abs as he did recently in Date Night. Wahlberg actually has that puffy, doughnutty cop look down pat here, and when he wails about being a peacock who needs to be let loose to fly, we recognize him as a full-fledged partner in Farrell’s zaniness rather than a mere sidekick. The Other Guys opens strongly and front-loads its best gags into the first third of the film. After that, the jokes begin to repeat themselves, and the plot becomes mired in unintelligible details of the white-collar crime that Gamble and Hoitz are investigating. Lots of stuff crashes and blows up, leaving Keaton, as the precinct captain, plenty to rail about. Also providing solid support are Jackson and Johnson as the station’s top cops, who only appear in the film’s opening sequences and whose ridiculous glory everyone seeks to emulate, and Riggle and Wayans Jr. as another pair of department go-getters. Scripted by Ferrell’s partners in the website Funny or Die, McKay and Chris Henchy, The Other Guys adopts that website’s overall tone of political discontent in its use of corporate criminals as comic punching bags. (Ferrell’s impersonations of George W. Bush helped popularize the website, along with political-campaign spoofs and digs at the economic crisis.) This film is never more pointed than in its closing credits, which offer a visually snazzy onslaught of statistics about economic disparity in the U.S. between the ultrawealthy and the average joes and kicks off with accompanying music by Rage Against the Machine. The Other Guys isn’t likely to be top dog at the station house or the box office, but it’ll be serviceable in a pinch.