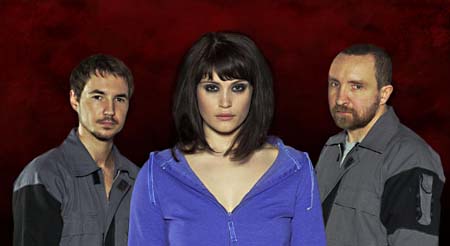 The Disappearance of Alice Creed

As thrilling cinematic tension goes, this UK import bypasses the metaphorical piano-wire garrote and blasts off into the razor-ribbon-around-an-infant's-neck stratosphere. No joke: You'll want to book an appointment with your manicurist beforehand, because your nails are going to be gnawed to the bloody quick by the time the final, perfect frame of The Disappearance of Alice Creed sears itself onto your retinas. This is director Blakeson's first major feature – by "major" I mean the first to secure an American release – and it's a beautiful piece of ghastliness front-loaded with menace and supercharged with the sort of gritty, stoic unease that used to be something of a British trademark before such recent Australian filmmakers as Nash and Joel Edgerton (The Square) and David Michôd (the forthcoming Animal Kingdom) sailed up from Down Under on tragic seas of criminal despair. The Disappearance of Alice Creed does both those films one better, though (no mean feat). A kidnapping caper with only three characters and hardly more than one location, Blakeson's genre masterpiece ratchets up the emotional suspense to mind-frying proportions. Of the plot, little can be said beyond this: Arterton (utterly redeeming herself from the stain of Clash of the Titans) is Alice Creed, who is kidnapped by two rough traders, Vic (Marsan, of the Red Riding trilogy) and Danny (The Damned United's Compston). Vic and Danny have a plan; the plan does not unfold as expected. Actually, very little in The Disappearance of Alice Creed arrives in sync with your expectations. Blakeson’s script is as good as his direction, and this genuine mind-blower of a movie has more real narrative surprises up its sleeve than any American caper film since The Usual Suspects, though is otherwise dissimilar to Bryan Singer’s breakthrough film. The film is delicious, welcome, and entirely satisfying and, as an added bonus, far and away the best genre-fan date movie of the year. See it with someone you'd love to cuff.