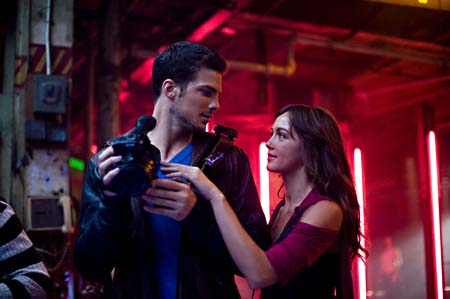 Why are the Step Up movies so white? Consider the evidence: Six romantic leads over the course of three movies – well, to be fair, really the same movie with Mad Libs-like switch-outs in character motivation and setting of the final dance battle – and not a single above-the-line non-Caucasian in the bunch, even as a multiplicity of ethnicities fills in as backup dancers and in bit parts. Step Up 3D's male lead Malambri (inadvertently making the case for original Step Up star Channing Tatum as a maestro of emotiveness) plays Luke, den leader to a crew of dancers living, loving, and battling in an improbably well-appointed NYC warehouse. Malambri appears to have been cast for his Drakkar Noir good looks and little else – certainly not for his dancing, which is spotlighted in an enjoyable tango and nowhere else. Any other member of the Pirates crew would've been preferable to Malambri – they're a likable group, with personality to burn – but it's Sevani, a carryover from Step Up 2: The Streets, who steals the show. As the gangly misfit Moose, Sevani has the theatrical impishness of a court jester but the soul of a poet, and his playful duet with a gal pal (Stoner) – set on the streets, to a remix of Fred Astaire's "I Won't Dance" – is easily the most winning sequence in a film that has its fair share of gaspingly good dance moves. But the 3-D format is a distraction. Sure, it's nifty enough to see dust particles swirling or hands swooshing at you, but mostly the 3-D muddles the invention and exquisiteness of the film's raison d'être: the dancing. 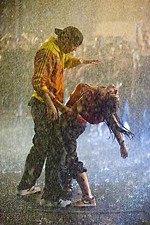 Step Up 2 the Streets
Romantic sparks fly (again) among students from different backgrounds at the Maryland School of the Arts.

Why Does the Governor Want to Keep Refugees Out of Texas?
The Austin Chronicle Show examines resettlement, and punk