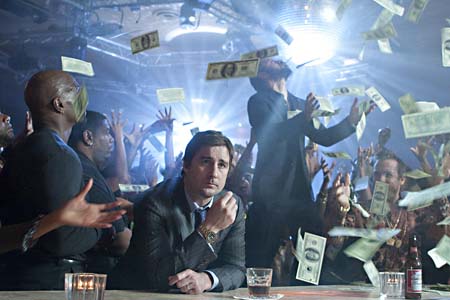 Why this titillating, ripped-from-your-2am-desktop slice of XXX-rated Internet history is receiving such a soft marketing push from distributor Paramount Vantage is beyond me. Like its subject matter, it deserves better. It's the true (albeit embellished, natch) story of the somewhat random birth of organized Internet porn, which, as everyone from your mom to your kids to the Russian mob and the (still incarcerated) gonzo porn magnate Max Hardcore knows is, let's be honest here, what the Net is all about. Or, at least, what 37% of it is about (according to recently released figures courtesy of Internet filtering outfit Optenet). With breezily profane panache and no small debt to both GoodFellas and Boogie Nights, Middle Men journeys backward in Internet history to 1995. It was then that two coked-up ne'er-do-wells – a former NASA technician and certifiable genius with the pitch-perfect name of Buck Dolby (Macht) and manic, chain-smoking sleazoid Wayne Beering (the gleefully anarchic Ribisi) – teamed up to create the first dial-up, porn-on-demand website. They quickly realize that the key to future success (success being relative, this meant more money for blow and hookers) rested on the simplicity – and, more important, the anonymity – of their customers’ burgeoning credit-card payments. Dolby, a computer guru as well as a walking freak-out, wrote the program (literally overnight) for the very first pay-by-credit-card porn site. Regardless of your stance on pornography, Dolby's brainstorm was a revolutionary act in every sense of the term. Their downfall began, predictably, when their success overwhelmed them: too much money and zero business skills. Enter Houston businessman and all-around fixer and family man Jack Harris (Wilson), a calm, cool, and initially very nice fellow who, in a convoluted spiral too complex to get into here, finds himself inexorably pulled into the slimy wake of Dolby and Beering's many meatheaded messes. Some examples: the involvement of ruthless Russian godfather Nikita Sokoloff (the ever-excellent Serbedzija, late of 24), an ill-advised dalliance with porn star Audrey Dawns (Ramsey), and run-ins with the professionally bent attorney Jerry Haggerty (Caan). The expository narration (from Wilson) comes fast, furious, and funny but never slows the gloriously crazed pace of this coke-fueled rocket ride to Planet Sin. With the performances amped up to 11 (including a swell cameo from Forster), you'd think Middle Men would result in a migraine, but that never occurs. Director Gallo, who previously penned Midnight Run and Michael Bay's two Bad Boys actioners, deftly integrates the histrionic historical narrative with endless money shots of Ribisi and Caan sharking it up, with everything set to a mid-Nineties music mix worthy of the worst strip joint you've ever visited (trust me, I've been there). Zealously nasty fun which, surprisingly, ends on something of a note of upbeat grace and familial redemption, Middle Men is more entertaining than 99% of 37% of the Internet. 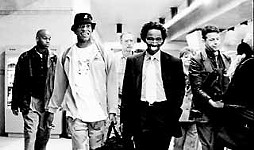