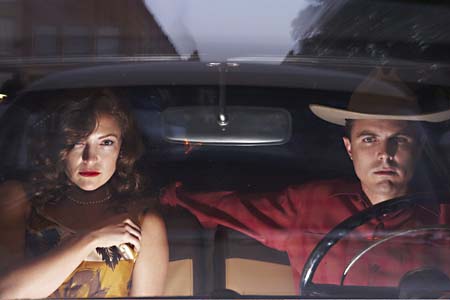 The Killer Inside Me

The ridiculously prolific director Michael Winterbottom (A Mighty Heart, 24 Hour Party People) fouls out badly with this screen adaptation (penned by John Curran) of Jim Thompson’s 1952 crime novel, The Killer Inside Me. Nearly everything about the film is miscalculated, although the primary offenders are the casting of reedy-voiced Affleck in the title role and the misinterpretation of the term “pulp fiction” to mean something on the order of beating all women to bloody pulps. Granted, the film’s sadistic violence is somewhat required by the title; however, a director can always make choices about the visual means used to depict killings. Curiously, the film’s murders of male characters usually occur offscreen or in long shot, while its women are killed in sadomasochistic frenzies that become indistinguishable from torture porn. The killer’s penchant for sex slaps and choke holds would be possible to display – even graphically – without the alluring coup de grâce of Alba’s red-streaked rump in close-up, deliciously bouncing in response to the blows. Affleck plays Lou Ford, a rural Texas flatfoot whose pleasant demeanor masks the sexual sadist and psychopathic killer within. Trouble is, there’s no hint in Affleck’s performance of the cold calculations required for a person to so effortlessly switch back and forth between personas. Lou experiences a few provocative flashbacks that might help explain why he’s turned out the way he has, but they are ultimately too unclear to reveal much. Affleck’s delivery is pure straight blade, nothing double-edged or deep-seated at all. Yet it takes no longer than the film’s opening sequences for Lou’s proclivities to rise to the surface. During a routine call to chase a prostitute (Alba) out of town, the feisty woman slaps him, which then arouses his instinct to whip her with his belt. And lucky Lou, she likes it. The tentacles of crime fan out from here. In addition to Affleck, none of the supporting actors are well-served by Winterbottom’s direction. Alba is pure pulchritude; Hudson, as Lou’s fiancée, is remarkably dowdy; Beatty all one-note bluster; and Baker plays a version of the West Texan inside of him. As a suspicious union boss, Koteas provides some interesting moments, and Pullman, in a late appearance, puts on a rollicking show. The look of the film and its set design create a great deal of period detail with very few assets. And, still, the gut-punch of Thompson’s stark language comes through from time to time. The Killer Inside Me is hardly uninteresting, and you get the sense that everyone involved tried really hard to pull off this difficult adaptation. But it would be impossible to view The Killer Inside Me as anything but a vast miscalculation.