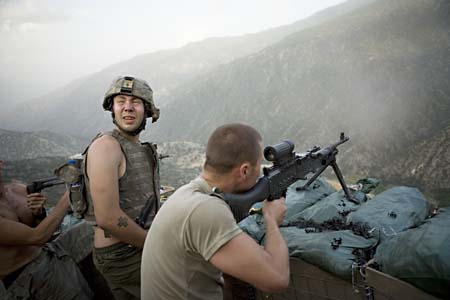 Restrepo is an example of photojournalism at its finest. The film chronicles the grueling 15-month deployment in Afghanistan of about a dozen U.S. soldiers of the Second Platoon, Battle Company, 173rd Airborne Brigade. Not only were these men (and these soldiers are all men) on the front line of this war, they were stationed in the Korengal Valley, a place so remote, mountainous, and craggy that it serves as a constant reminder that there is no such thing as a straight line in nature. It’s a vast landscape in which every rock can provide safe harbor and every crease in the topography can shelter unknown peril; it’s the perfect setting for the sort of one-man guerrilla operations the Taliban has waged against American troops. During the period of time the men were stationed there (2007-2008), the Korengal Valley, located near Afghanistan’s border with Pakistan, was dubbed by CNN as the “most dangerous place on earth” for the amount of ordnance fired and deaths counted as the soldiers fought ridge by ridge for control of the valley. Defending a giant basin thoroughly surrounded by 10,000-feet-high mountains, the men felt, as one of them put it, “like fish in a barrel,” and, indeed, a few of them died after being shot in their sleep. Journalists Hetherington and Junger, originally reporting for Vanity Fair and ABC News, keep their observation on the soldiers; the filmmakers have no ostensible mission but to report on the mission of the soldiers. They offer no commentary and are a rarely felt presence behind their cameras. The footage from the Korengal Valley is interspersed with more conventional and reflective interviews conducted with the men while deployed at their home base in Italy. It’s during these one-on-one interviews that we learn more about the individuals, about whose sleep is interrupted by nightmares, about their frustrations, grief, and pride. One man, whose stark life contradictions make him seem almost like a character in a Sam Fuller war movie, was raised by a “hippie mom” who didn’t allow him to play with guns. Another who talks of the adrenaline high he gets from combat could be a character out of The Hurt Locker. Others are extremely eloquent and forthcoming, but never discussed are the politics of their mission. Junger (The Perfect Storm) and war photographer Hetherington also keep their opinions to themselves, and apart from the choice to not show bloody images of the casualties, they provide a mostly fly-on-the-wall perspective. Still, their images make statements with their clarity and accumulation, much like those first images of Walter Cronkite and other reporters in the jungles and rice paddies of Vietnam, visually demonstrating to themselves and to us back home that the war was unwinnable in the manner in which we were waging it. Indeed, the Korengal Valley has proven so intractable that the U.S. command has pulled most troops out of the area at this point in the war. Restrepo, which is the moniker of a valley outpost named in memory of one of the first platoon members killed, is a lasting portrait of all soldiers who willingly helicopter into the “most dangerous place on earth. (See "Into the Valley of Death, and Back Out Again," July 30, for an interview with Tim Hetherington.) 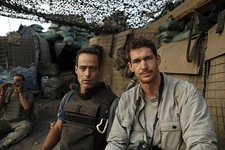 Into the Valley of Death, and Back Out Again
Filmmaker and war photographer Tim Hetherington talks about his yearlong embed in Afghanistan 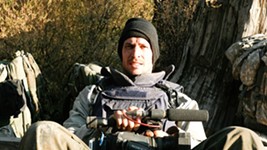