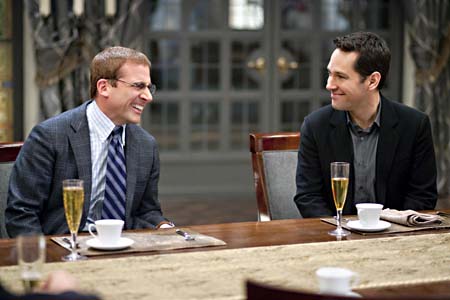 The most memorable, sweet, and absurdly amusing characters in Dinner for Schmucks – a remake of French director Francis Veber's film The Dinner Game – aren't even human or even, really, characters. They're dead prop mice: stuffed, costumed, and posed in tiny, dramatically efficient dioramic re-enactments of famous artworks, such as Edvard Munch's The Scream and Leonardo da Vinci's The Last Supper. As created by the lead schmuck – a hapless, clueless IRS minion named Barry Speck (Carell, rehashing multiple notes from his lengthy comic repertoire) – these touching little verminous vignettes provide a glimpse into the true heart and soul (or what's left of it) of Dinner for Schmucks, a film that is far more aggressively mean-spirited than I suspect its makers intended. Barry, cloaked in a vintage-ugly windbreaker and a precarious mental state that whipsaws from merely disconcerted to overtly pathological, meets Rudd's up-and-coming financial wunderkind Tim, who, with his vile boss, Fender (Greenwood), dangling the possibility of major career advancement before him, recruits poor Barry for the titular dinner at which various wealthy caricatures meet, dine, and make sport of sundry schmucky caricatures. The dinner, which arrives at the end, is the lesser end which the greater comic means of the film strive toward, however. The real question here is whether the not-yet-entirely corrupted Tim will sell what remains of his soul – by prostrating the dim Barry before the altar of latter-day Wall Street $ucce$$ – and whether the nerds will have their revenge. It's a dramatic conundrum with few surprises (although Flight of the Conchords’ Clement is a schmucktastic high point) as Carell alternately ricochets between being horrifyingly socially inept and meekly mousy. There are inspired gags, to be sure, but they're few and far between. The preposterously riveting Galifianakis, as one of Barry's semi-insane co-workers, is another inspired bit of casting and comedic execution, but really, this repast left me less than sated.