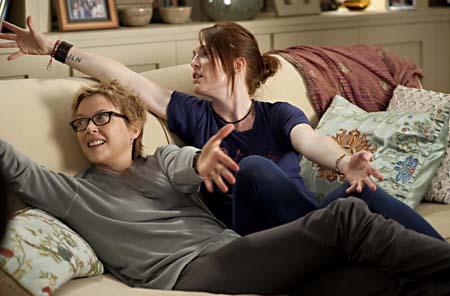 The Kids Are All Right, a grin-cracking great portrait of a modern American family in minor and then major crises, arrives smack in the midst of our matrimonially schizophrenic culture's seemingly endless, probably pointless debate on the institution of marriage. The ongoing, increasingly hysterical, and, for the most part, just plain dumb brouhaha surrounding the assumed sanctity of wedlock and its satellite piffle – the silly question of whether gay men and women deserve to suffer the same potentially dreary, infrequently rapturous two-person fate as their more "traditional" countrymen (well, duh) – and all the attendant natter, blather, and hot air are making a mud fight of what used to be the gayest of all the dreamy days in lovers' lives. Cholodenko, who directed the superlative, heart-crushingly excellent High Art in 1998 and the underrated Laurel Canyon in 2002, has here crafted one of the most honest and painfully, hilariously accurate portraits of an American marriage and its resultant, tumultuous family ever put on film. It may be the most honest. It's certainly the only one I can recall in recent years that made me both laugh out loud one moment and then recognize myself – part of myself, anyway – the very next, and then, as if that weren't enough, go all teary-eyed when I least expected it. The kids of the title are 18-year-old Joni (Wasikowska), a smart, introspective young lady who will soon be leaving for college, and her younger, less academically focused brother, Laser (Hutcherson), who, as the film begins, has fallen in with the archetypal Bad Friend. The parents of these two astonishingly realistic kids – in action, word, deed, and, not least, their mastery of the parentally irksome single-eyebrow-raise – are middle-aged lesbian couple Nic (Bening), an ob-gyn with a type-A personality, and Jules (Moore), a sensitive, pragmatic sort currently thinking about getting into landscaping. The fact that they're gay and have raised a pair of offspring who are, indeed, all right isn't the crux of the film, however. That phallic fulcrum arrives when Joni and, in particular, Laser seek out the sperm donor who is, genetically speaking, their "real" father. As fate – and the script (from Cholodenko and Stuart Blumberg, fine enough a thing to be required reading for all would-be scenarists) – would have it, Dad turns out to be Ruffalo. After an initial meeting between the donor and his DNA strands, which is pitch-perfectly awkward and wholly natural, Ruffalo's locavore restaurateur Paul is invited to dinner to meet the moms. After that bit of awkward comic mesmerism, during which Bening and Moore establish the sort of onscreen rapport most movie spouses strive for but rarely achieve, the film takes off in all sorts of capricious, antic directions. Nic is worried about the impact this motorcycle-riding, ultra-cas (as in casual), SoCal locadude will have on her carefully reared children, and Jules is discombobulated for similar (albeit ultimately very different) reasons. Anyway, it's a joy to watch Bening, Moore, and Ruffalo acting not so all right so perfectly. The chemistry among all three adults (and the kids, too) is as real as it ever gets on celluloid. The Kids Are All Right isn't, in the end and in its heart, a melodrama about gay marriage or even a comedy about the sudden appearance of Ruffalo in someone's life (been there, seen that). It's about the slow, inevitable grind of marriage – any kind of marriage – with all of its giddy peaks and melancholy, abyssal trenches. It's about the eternally unknowable curveballs life throws at you and how you either step up to the plate toward triumph or turn away in tears or terror or both. It's about love.

READ MORE
More The Kids Are All Right 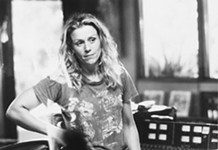 Laurel Canyon
In the promotional push for Laurel Canyon a couple of months ago, it seemed like Frances McDormand was everywhere, with features in The New Yorker ...