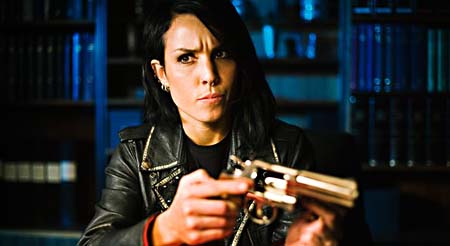 The Girl Who Played With Fire

"Played with fire" may be misleading, playfulness not being one of the leading characteristics of Lisbeth Salander, the black-leathered, dragon-tatted, hog-riding hacker – bisexual to boot! – who has, almost improbably, beguiled an international legion of readers in the late Stieg Larsson's bestselling Millennium trilogy. Salander (played here by Rapace, reprising her role from the first film, The Girl With the Dragon Tattoo) hardly cracks a smile here, although she does sport an uncharacteristically hale-looking glow at film's beginning, when she is tanned and taking a breather at an exotic beach locale. Pretty soon, though, Salander's back in her native, pale-making Sweden, where she reconnects with an old flame, Miriam Wu (Garbi), and assiduously avoids her more recent paramour, Mikael Blomkvist (Nyqvist), a crusading journalist at Millennium magazine and the series' co-lead. As in the source book, The Girl Who Played With Fire's chief frustration is in how removed Salander and Blomkvist are from each other: Even as their plot strands dovetail – Blomkvist's investigation into a sex trafficking ring dead-ends in a double homicide, and Salander's fingerprints are found on the murder weapon – the two leads share nary a word. In fact, long stretches of the film – surveillance scenes, car tails, the like – play out in admittedly tense mostly silence. Alfredson, who replaces original director Niels Arden Oplev, has crafted a film that is heavy on atmosphere but thin everywhere else: Even at two hours plus, secondary and tertiary characters get short shrift (we hardly knew ye, Detective Bublanski), and there's not a lot of participatory satisfaction to be had in the central mystery. There are no complaints to be made with the casting; Rapace, especially, is dead-on as the indefatigable Salander, who, like some kind of hyperjuiced, anti-Energizer bunny, takes a licking (and a beating … and a couple bullets …) and keeps on ticking. Too bad this adaptation feels just as automatic. 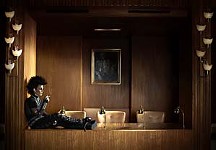 The Girl Who Kicked the Hornet's Nest
The third book of Stieg Larsson's addictive Swedish trilogy is now onscreen.