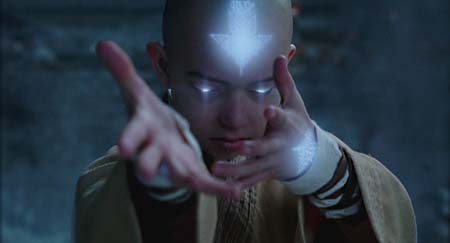 There’s a new Avatar at the cineplex, but this one comes not from the imagination of James Cameron but, rather, the animated Nickelodeon series Avatar: The Last Airbender. Replete with its own vast mythology about the airbending cultures and a multiaged fan base hungry for more chapters in the now defunct TV series, this film dropped the “A” word from its title while retaining the show’s creators, Michael Dante DiMartino and Bryan Konietzko, among the film’s producers. Director Shyamalan, who has rarely met a myth he didn’t like, cottoned to the airbender lore, while maybe also having a sixth sense about a project that had franchise potential. Indeed, instead of containing one of Shyamalan’s signature surprise endings, the conclusion of The Last Airbender is a tease for the saga’s sequel. Yet, with a surprising lack of verve, humor, and narrative tension, Shyamalan’s live-action foundation film is unlikely to woo new fans to the tale. Despite the rampant tribal fighting that drives the narrative, The Last Airbender is a fairly bloodless PG affair, although that is not the real problem with the story. The action sequences are just not constructed or paced very well, and an avatar hero who will simply be reborn if murdered takes all the mortal threat out of skirmishes. The story is set in a world where the tribal Air, Water, and Earth nations have been under siege for the last 100 years by the industrialized Fire Nation, which has turned its collective back on the spirit world and seeks global domination. Each nation has a chosen few who can command and bend their land’s element to their will – which makes for some nifty images, until they grow increasingly repetitive and ordinary. Young waterbender Katara (Peltz) and her brother, Sokka (Rathbone), discover the avatar Aang (Ringer), the last of the airbenders, whose nation has been vanquished by the firebenders. Together, they set out to free their nations from the fire overlords and fulfill their destinies. (Destiny is a very important motivator in this saga; everyone has one, which must be reassuring to young viewers. So, too, courageous children lead the grown-ups in this world.) Stark divisions separate the lifestyles and appearances of all the tribes. Although meta-debates have recently sprung up regarding the film’s expansion of the airbender nations’ racial attributes, the film’s divisional traits seem to be grounded in other, more conventional stereotypes. The good water tribes live amid the white snow and ice; the bad industrialist fire tribes are surrounded by darkness and enter with thundering tympanic and horn motifs. As the arch-villain of the piece, Mandvi does the film little good by his popular association with The Daily Show With Jon Stewart, as tinges of that show’s ironic comic delivery inevitably shadow his character’s dastardly pronouncements. Patel (Slumdog Millionaire), however, as tortured Fire Prince Zuko, provides the film’s only exciting performance. Without his dramatic persona, the film’s most winning characters would be its mythical creatures: a flying platypuslike thing and a companionable lemurbat. A franchise needs more than cute creatures to survive.