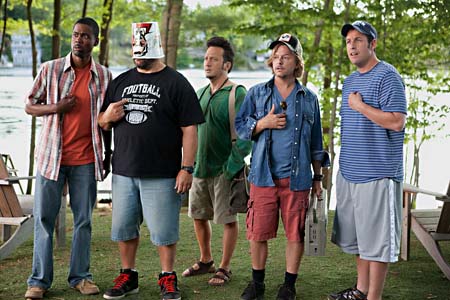 Who is Adam Sandler's presumed audience these days? Is it a) men who came of age during the Clinton administration and are seeking rose-tinted refuge from the emasculating, anarchic Aughts?; b) masochistically inclined Paul Thomas Anderson fans hoping against hope that Sandler will somehow, someday repeat his stunning seriocomic turn as Punch Drunk Love's Barry Egan (or some variation thereof); c) Colin Quinn and Steve Buscemi fans, desperate for a fix of their heroes’ ever-dwindling screen careers?; or d) seriously, who cares? The correct answer is probably "all of the above, and then some," chiefly because a review of Sandler's checkered past roles reveals a once-daring comic slooowly sinking out of sight in a cookie-cutter quicksand career that – Judd Apatow's smart, hilarious, heartbreaking Funny People notwithstanding – has more or less turned into a rote, staggeringly unchallenging, and generally unfunny series of riffs on none other than Adam Sandler™. Grown Ups is the latest in an ongoing series of Sandlerian schmaltzfests that are at once achingly nostalgic morality tales (Big Daddy, Mr. Deeds) and a stuttery repetition of everything that has come before. All but gone is the manic, hair-trigger man-child of Billy Madison and Happy Gilmore. Sandler has almost entirely replaced that aspect of his comic character with a sort of child-man who looks longingly to the past in an effort to forestall the future. Thus we get the harried dad of Click, the other harried dad of Bedtime Stories, and Grown Ups’ successful (but harried) Hollywood agent (and dad) Lenny Feder, who reunites with his four best friends from the old junior high school basketball team only to realize that his current life, wife, and kids are drowning in the shallows. But could it be it's not too late to change? Give us a break already. Grown Ups is exactly, beat for beat, what the previews would have you believe: a depressingly predictable, two-chuckle deconstruction of what Sandler sees as the modern American male, represented by ex-SNLers Spade (the single guy), Rock (the house husband), Schneider (the New-Agey age-denier with issues), and King of Queens' James (the kinda-sorta familial ideal with still more issues). Perhaps that's too much to read into Sandler's psyche, but, nah, I don't think so. It's obvious on the face of it that Sandler is, like so many of his characters, stuck in a midlife rut and spinning his wheels, desperate for a way out. Paging Paul Thomas Anderson, please.