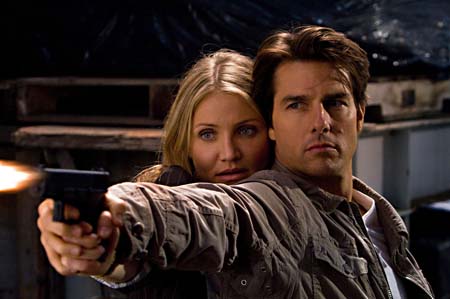 They say everything old is new again, which I suppose must explain the popped collar and Members Only-style jacket that Cruise, peacocking, sports in Knight and Day's opening minutes. It's unclear if the filmmakers meant for our collective brain to jog back to the mid-Eighties, when Cruise first began making a name for himself in pictures, but so it does – the effect made all the more unnerving given the actor's seeming agelessness. Here, he looks perky-eyed and lavishly moisturized, more boyish at 47 than he was a decade ago when he played Frank Mackey, the brilliantly toxic misogynist of Magnolia. Cruise's character in Knight and Day, a CIA agent gone rogue named Roy Miller, is like the anti-Frank. He's unfailingly polite to women, especially Diaz's Boston mechanic June Havens, quick to compliment her pretty dress or bodily shield her from a fresh barrage of artillery. But all attentiveness aside, Cruise's Roy doesn't seem all that interested in women; he radiates about as much sex and danger as an Eagle Scout (which he proudly points out he used to be). We must settle, then, for a sort of sexless chumminess struck between Cruise and Diaz, and they do seem awfully companionable as the wronged spy trying to right his name and his sparky civilian charge. Diaz's June doesn't get interesting until midway through the movie, when she makes the switch from mostly helpless to adventure-seeking (her Bahhh-ston accent waits until three-quarters of the film is through to make its big entrance). Roy eventually does get kissy with June (strictly first base), but he's far more enthusiastic about drugging her against her will. Scripter Patrick O'Neill taps that joke repeatedly, even as it infuriates the viewer still naively wishing her entertainment might be tethered however faintly to logic (as in: how exactly does a man more than once get an unconscious woman through customs and out of the country?). Logistics don't worry Mangold (Walk the Line, Kate & Leopold) – fade-to-black is his winking way of addressing the plot holes – and clearly he expects his wink to be met by our smile. Frankly, I don't like to be bullied, and bullying is exactly what Knight and Day – overly cute and overconvinced of its own cool – does best.