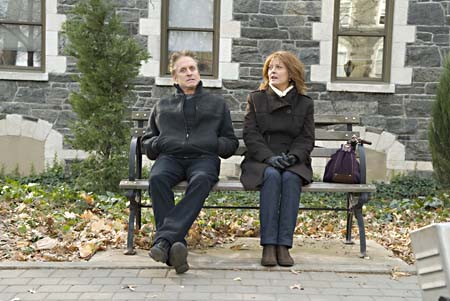 Ben Kalmen (Douglas) is one downward dog. No, this solitary man of the title is not into yoga, he’s just a skirt-chaser who makes one bad decision after another. A formerly successful businessman, Ben is already well-entrenched in his downward spiral at the time of the movie’s start (that is, apart from a short preamble that is supposed to provide the explanation for all his bad behavior – which it doesn’t). This character study, ultimately, doesn’t add up, but with Douglas playing the subject under investigation, the character is never slack or lacking definition. Formerly the owner of several car dealerships in the New York area, Ben is familiar to everyone from his ubiquitous television commercials and occasional appearances on the cover of Forbes and the front page of The New York Times business section. Yet a few years back, he started cooking his books and compulsively bedding younger women, which has left him publicly disgraced, broke, and divorced. Why such a smart, talented, and successful man would completely change his business m.o. in his mid-50s is never fully addressed, but maybe he’s doing research for Smart Men/Foolish Choices. More problematic is the need this near-60-year-old has for daily sexual conquests, even at the expense of his loving wife (Sarandon) or current girlfriend (Parker), whom he beds for her business connections. His slide downward occurs at a narratively souped-up pace until he’s eventually slinging hash in the campus-area hamburger joint of his old college pal (DeVito). Solitary Man is co-directed by Koppelman and Levien, the same team who wrote Ocean’s Thirteen and Rounders, among other films. They also co-wrote and -directed the 2001 film, Knockaround Guys, which tells the story of a group of young wiseguys who also make a lot of dumb choices as they face declining job opportunities in the mob. If anything, Solitary Man seems a bit overwritten, although it is indeed a pleasure to watch Douglas and the rest of this impressive cast deliver the dialogue. In light of Douglas’ imminent re-emergence as the stock-market titan Gordon Gekko in this summer’s Wall Street: Money Never Sleeps, it is especially interesting to see him playing an entirely different version of a rich weasel. Ben is a charmer, and Douglas could perform this kind of role in his sleep so it’s exciting to see him fully engaged here and firing on all cylinders. The actors are all charged up, too; there’s just nowhere in this script for them to go. 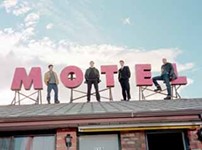 Knockaround Guys
They're fish out of water, these junior mobsters from Brooklyn skulking around a sleepy Montana town trying to recover some missing loot. Knockaround Guys mixes ...