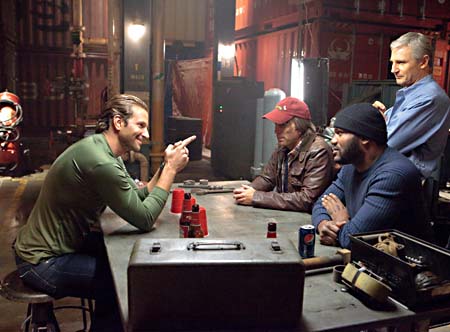 The A-Team is a product that begs to be consumed alongside a jumbo tub of movie-theatre popcorn, complete with the butter-slick, tummy-sick aftereffects that are sure to leave a longer-lasting impression than anything mayhem maestro Carnahan cooks up onscreen. But hey, that’s (summer) entertainment, when expectations lower in inverse proportion to the rising temperatures. The cast seems to have been assembled primarily for its blinking resemblance to the stars of the original Eighties TV series about a renegade group of former Army Rangers now for hire: Cooper is a blonder, buffer version of ladies’ man Templeton “Face” Peck; South African actor Copley (District 9) plays the wobbly-accented stand-in for flyboy "Howlin’ Mad" Murdock (in a part that Spike Jonze, channeling his twitchy Three Kings private, would have knocked out of the park); former Ultimate Fighting champion Jackson steps into the man and Mohawk that Mr. T immortalized, B.A. Baracus; and Neeson goes platinum blond for a charmless spin on George Peppard’s original stogie-chomping squad leader, Hannibal Smith. The plot here is negligible – U.S. Mint engraving plates go missing, and the wrongfully accused A-Team must clear its name – but that piddlingness matters only in that it gets the boys from point A to point B, or rather, from one wildly ludicrous and artillery-charged scenario to the next. Still, Carnahan, with co-writers Brian Bloom and Skip Woods, shows real flair with these action set-pieces – an airborne tank, a container ship collapsing like a house of cards – even as narrative logic and spatial coherence fly out the window. 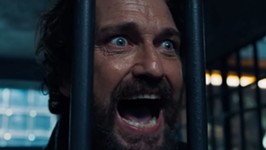 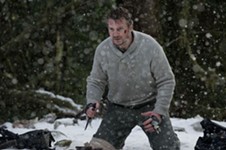