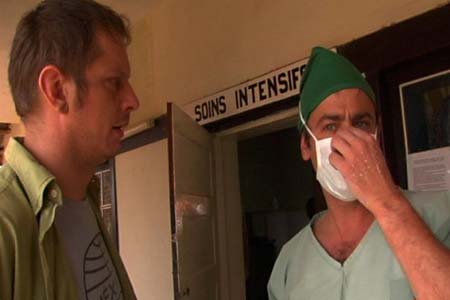 Living in Emergency: Stories of Doctors Without Borders

The title makes explicit that this documentary takes the perspective of the volunteers of the humanitarian aid group Médecins Sans Frontières/Doctors Without Borders (MSF), which is perhaps wise: No one ever idealized the plight of victims of famine or genocide, but certainly some of us have been naively attracted to the combination of do-gooding and danger that defines volunteer work in geopolitical hot spots. Living in Emergency, then, is like a hard slap to the face: There is nothing remotely romantic about this grim depiction of two missions in Liberia and Congo in the mid-2000s. The film follows four MSF volunteers who range from fresh-faced newbies to battle-scarred veterans of the organization: Tom Krueger, an American surgeon who gave up a 20-year private practice to go on his first mission to Monrovia, at the Mamba Point Hospital (the only free hospital in a city of 1 million); the irrepressible Italian Chiara Lepora, who leads the Monrovia mission; Davinder Gill, a 26-year-old Australian tasked, on his very first mission, with running a remote outpost in the Foya district of Liberia; and Chris Brasher, another Australian, who arrives in war-ravaged Congo "running on empty" after nine years with MSF. From the looks of it, Hopkins, in his first feature-length documentary, enjoyed unfettered access to the doctors both at work and unwinding; the camera doesn't flinch from graphic scenes of amputation, brain drilling, and all-around awfulness, even if the viewer repeatedly does. As for downtime, well, that's a pretty big downer, too: The doctors are candid and un-self-censoring in detailing their feelings of frustration, helplessness, and growing disillusionment. The film documents one joyful, unbridled party that casually hints at sexual tension, but Hopkins mostly skips on exploring the sex- and substance-fueled culture that commonly accompanies life and death conditions. If there's a complaint to be made about this utterly engrossing documentary, it's that its portrait of these four doctors is limited to the experience itself, with no nod to their homefront lives or the unique character psychology that sent them halfway across the world and against unimaginable odds. Still, the film's fixed scope reads true: In times of war, inner life is bound to take a backseat to outer horrors.

Living in Emergency: Stories of Doctors Without Borders – Live With Elizabeth Vargas
...