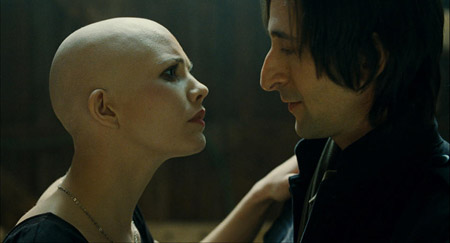 "The event on which this fiction is founded has been supposed, by Dr. [Erasmus] Darwin, and some of the physiological writers of Germany, as not of impossible occurrence." It's a fair bet that Mary Wollstonecraft Godwin Shelley had little inkling of how galvanically influential a literary dodge the opening sentence of her most famous work would become. She was, after all, very much a teenager when she began writing Frankenstein: or, the Modern Prometheus in 1816, while spending a dreary but, by all accounts, hopelessly romantic winter with future husband Percy Bysshe Shelley and Lord Byron in Switzerland. (Check out Ken Russell's Gothic if you're keen for a more scurrilous and fun accounting.) Splice is a twisted little genetic updating that's not half as electrifying as Shelley's novel twist on the whole man/God/creation situation (and the perils thereof). The film owes everything to Frankenstein, but these days what doesn't? Splice director Natali is American-born and Toronto-based (he directed the 1997 stunner Cube), and here he has crafted a classic cautionary tale that works simultaneously as a thriller, love story, and meditation on what it means to be a scientist in a time in which everything is suddenly possible – at least in theory. It's also a grim window into a genetically engineered future that is almost certainly going to happen, if it hasn't already. Clive and Elsa (Brody and Polley) are married geneticist geniuses in the employ of a chilly biotech firm that's seeking to "splice" together the genetic strands of various organisms with the aim of creating new life forms – chimeras whose enzymes may carry the cures for all manner of human ailments … if all goes according to plan. Despite several plot devices having been lifted from the films of fellow Torontonian David Cronenberg (notably, The Fly), things do not go according to plan, spectacularly so. French actor Chanéac turns in an emotionally bravura (if perhaps a tad too animé-esque, ocularly speaking) performance as the outcome of Clive and Elsa's ill-conceived experiment in the creation of a new species dubbed Dren. When at its best, Splice is a seething cauldron of intellectually of-the-now arguments, both pro and con, which examine the rapacious nature of Big Pharma, the necessity and danger of unshackled scientific progress, and the too-fine line between man and man's oversized ambitions. Oh, and love, hope, horror, and, yes, semi-mad (but no longer all that weird) science. Splice will make you uncomfortable for the same reason that Shelley's original literary template has metastasized and gone viral, again and again, over the past two centuries. It addresses, in genre terms, our fear of mortality, our dream of conquering oblivion, the soul-deep surety that time is running out. Homo sapiens, like so many failed species before us, are messy, inchoate animals, adrift from nature, yet still, against all odds, struggling to do the right thing. Except, so often, we do the exact opposite. 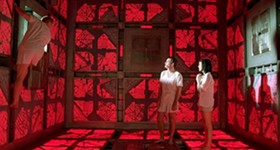 In 1961 Rod Serling penned a Twilight Zone episode entitled Five Characters in Search of an Exit. Although it's never been one of that ...