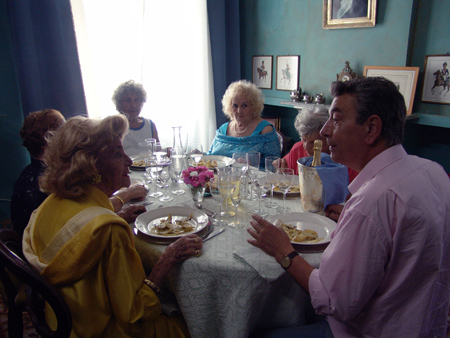 Di Gregorio co-wrote Gomorrah, a shuddering Mafia exposé that makes a person want to look away from all the awfulness onscreen. Mid-August Lunch, the 60-year-old's directorial debut, achieves rather the opposite effect; so cozy and lulling and slight is it, I could hardly keep my eyes open. That is not quite the disparagement it sounds like; Mid-August Lunch's more-or-less 24-hour cycle takes place around the Ferragosto holiday on Aug. 15, when it is hot and bright and the Roman people have either emptied the city or retired indoors for a nice long nap. Middle-aged bachelor Gianni (played genially by the director) plans on a quiet holiday with his 97-year-old mother (played by De Franciscis), with whom he lives. In a smartly underplayed preface, Gregorio establishes the mother-son dynamic: loving but exhausting. Her demands, while not immoderate, are relentless, and Gianni is run ragged as her full-time caretaker. Now imagine that, the film supposes, with considerable mirth, times four: Partly through accident, partly through design, Gianni takes in three more senior-aged women for the Ferragosto holiday, Italian mamas dumped by adult children who want to go play. The quartet of senior women are, for the director, mostly a means to an end, their neediness and snipping and restricted diets spinning Gianni to and fro. Di Gregorio has not unreasonably given himself the lead: His hero is likable but one-note, and that note can be found in the bottom of a bottle of vino. But these women! These women are marvelous, with ancient, creased faces and the kind of admirable fuck-all attitude that comes with age. I couldn't take my eyes off them. The Salt of Life
This Italian import by the director of Mid-August Lunch addresses the concerns of aging men who realize they are no longer attractive to young women.