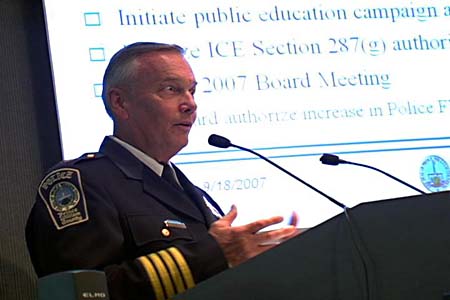 This interesting documentary, which has spent the last half-year on the film-festival circuit, has achieved, rather suddenly, the utmost in topicality in the wake of Arizona’s passage of its infamous “show me your papers” law. Byler and Park’s film records the 2007-2008 events in Prince William County, Va., that surrounded the passage of a similar measure aimed at curbing illegal immigration. The county board of supervisors there unanimously passed a law requiring police officers to stop anyone whom they had probable cause to believe was an illegal alien. Byler and Park, co-founders of the Coffee Party, were there to observe every public moment as the board wrestled with the fallout and concerned citizens galvanized around both sides of the issue. Events grew more complicated once the police chief calmly informed the board that new taxes would have to be passed in order cover the $14 million of estimated extra expenses to train his people in the details of upholding the law and to purchase cameras to mount on the dashboards of all police cruisers. Most telling, however, was the eventual testimony of the leaders of the Federation for American Immigration Reform (FAIR), the group ultimately behind both the Virginia and Arizona initiatives. In Virginia, the group helped guide the efforts of the indefatigable blogger who founded Help Save Manassas, the group that led the charge against the illegal aliens. In the end, this film exposes the calculatedness of politicians who exploit the immigration issue as a boon to their election bids. Part of what makes 9500 Liberty so special is what Byler and Park did with their footage before it was assembled into this feature film. They created a YouTube channel and posted all their interviews and clips online as they were gathered, and they encouraged viewer participation in shaping the material and steering the filmmakers toward unexamined aspects of the subject. In time, the Virginia statute was amended to eradicate the “probable cause” provision, so that a person’s legal status could not be investigated unless the individual was first apprehended for another crime. The film has served as a cautionary tale, until the legislators in Arizona, of course, stirred things up again. Byler, whose previous narrative films Americanese and Charlotte Sometimes both won Audience Awards at previous South by Southwest Film Festivals. 9500 Liberty has little of the flowing grace of those movies and evidences the jagged video look and on-the-fly cinematography common to so many modern documentaries. Yet what this film has in urgency and timeliness makes it a unique witness to our times. 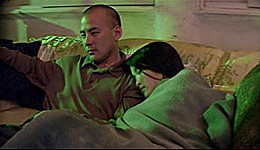