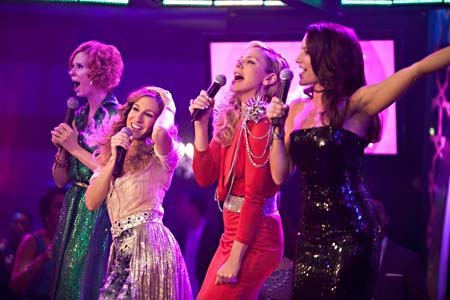 Like Carrie Bradshaw (Parker), who frets that the “sparkle” has gone out of her two-year marriage to Big (Noth), this film sequel based on the long-running HBO series douses whatever sparkle remains of these beloved characters and their adventures in the big city. True, three of the characters are now married women while the fourth, menopausal Samantha (Cattrall), is now dubbed the Hormone Whisperer. But these life changes are no excuse to shunt the gals into a sparkle-free zone. The problem lies with the unimaginative story premise and the quip/reverse quip dialogue that just may be better-suited to half-hour television shows than this nearly 2½-hour movie feature. Writer/director King piles on the lame puns and product mentions to the detriment of character and plot development. It may sound like a good idea to take the girls out of the city and plunk them down in the alien culture of Abu Dhabi, where the entire subject of “sex and the city” is taboo. Yet the conflicts that arise regarding sexual politics are entirely predictable and highlight the obvious. (Less obvious is the reality that half of Sex and the City 2 was filmed in Morocco instead of Abu Dhabi, which, presumably, was more receptive to the idea of ribald American women than the United Arab Emirates, where sharia law rules.) The opulence of their hotel in Abu Dhabi, where a sheik has offered Samantha and her gal pals an all-expenses-paid visit, takes their already over-the-top NYC lifestyles and spins them into the stratosphere. The private plane that flies them there; the four Maybachs that whisk them, each in her own vehicle, from the airport; the four butlers who tend to their needs: The atmosphere exaggerates the story’s inherent fantasy aspect. The luxurious lifestyle maintained by the women over the years, even at the expense of economic logic, might lose some of its fanciful illusion in light of America’s economic downturn in recent years and simply appear crass and insensitive to viewers. The film instead puts the onus of profligate extravagance on the Arabs, while it also intrinsically rebukes the Arab men for their hypocritical puritanism. Well, at least we still have the fabulous fashions to gaze at, right? Wrong. I don’t know what happened to the taste of the characters or costume designer Patricia Field in the intervening years, but the clothes in this movie are no fun at all: frequently preposterous, yes, but attractive and aspirational, no. Scenes of Carrie back home with Big hashing out the emergent wrinkles in their relationship are interminably repetitive. In fact, the only scene that contains honest-sounding dialogue is one in which Miranda (Nixon) and Charlotte (Davis) drink and confess their closeted feelings about motherhood. Also providing some bright moments is the film’s over-the-top gay wedding, replete with live swans and Liza Minnelli officiating, as well as performing her own song-and-dance rendition of Beyoncé’s “Single Ladies (Put a Ring on It)”. Maybe if the film were at least a half hour shorter, Sex and the City 2 wouldn’t feel as though it had overstayed its welcome. As is, the sands drip through its hourglass like Saharan sands through stilettos. 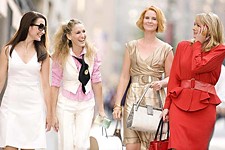 Sex and the City
The new feature stands on its own (typically stilettoed) feet, while holding fast to the series’ singular mix of the giddily ribald and brutally confessional.