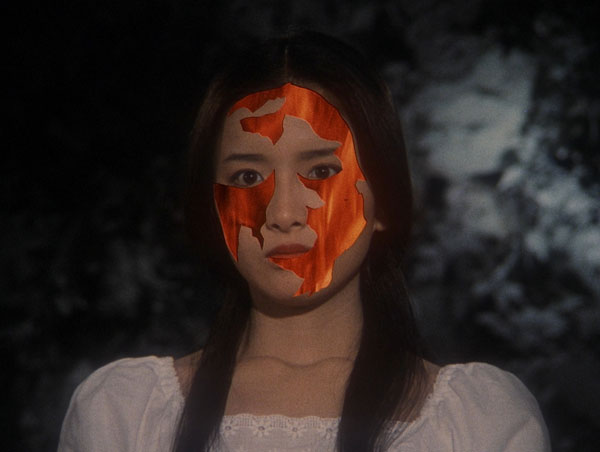 You, my friend, lover that you are of the obscure, the grotesque, the inscrutable, and the just flat-out funky and awe-inspiringly eccentric, have never, ever seen anything like House (aka Hausu). Even by my permanently warped standards, House is beyond the pale: a surreal, indefinable piece of proto-Japanese horror/comedy that was made in 1977 (it was director Obayashi's debut feature), only to find a second life at Austin's Fantastia International Film Festival, Sitges, Fantasia Fest, and wherever connoisseurs of the outré, the outrageous, and the seriously freaky gather. But how to convey to you the sense – much less the meaning or the maddeningly helter-skelter technique – of a film that plays out like a gorgeous nightmare prank, dripping, oozing with splendid set-pieces, bordering, at times (okay, all the time), on Dada (dance numbers!) mixed with crimson gore, eerie animation that can only be described as unbalanced and haunting, and, lest I forget, with enough severed body parts to do Sam Raimi proud. It's something of a lone masterpiece in a nonexistent mash-up anti-genre nano-niche and holds you rapt, spellbound, riveted, and dying to discover what totally inappropriate yet oddly right revelation the next scene or sequence – or odd fade-out, charmingly anomalous old-school background effects, or random act of comic violence – comes next. The plot, and one uses the term with some major elasticity attached, follows (and occasionally stalks) a group of seven teenage girls (usually attired in schoolgirl uniforms), led by Gorgeous (Ikegami), who flees the home she's shared with her father (Sasazawa) when Pop's irritating new main squeeze enters the picture. Gorgeous (the nickname fits) hits the road to visit her aunt (Minamida) but not before she ropes in six of her best friends, a dream-pop collection of Seventies-era J-pop carnality-lite and old-school Japanese insanity of the very best kind. The house of the title belongs to the aunt; at the risk of spoiling your newfound appreciation of this house's many, many surprises, suffice to say Auntie's cat has green laser eyes. Delirium ensues, but it's often dreamlike, a phantasmagoria of '77 Japanese kitsch and camp and avant-garde kitchen-sinkage. Granted, House, a bona fide cult film of the first rank, is hardly to everyone's tastes. But I urge you to see it, and quickly. Director Obayashi has gone on record stating that the madhouse storyline (or, you know, lack thereof, but in a great way) came from his then-11-year-old daughter, which, in hindsight, makes perfect sense: It's a child's dream of an adult world chockablock with hormonal overdrive. The film is also perfectly understandable in terms of Japan's (at the time) depressed economy. House was made during a time in the Japanese film industry when even the mighty Godzilla was reduced to battling sub-Ultraman monsters and low-budget pinku (softcore porn, usually funded by Yakuza cash) ruled what remained of the once-mighty Japanese film industry. That House was made at all is a minor miracle. That it has returned, to critical acclaim and a new generation of fans, is a major miracle. Truly, this is some kind of wonderful. (Horrific, hilarious, disturbing … but wonderful.) 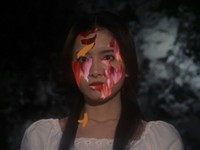