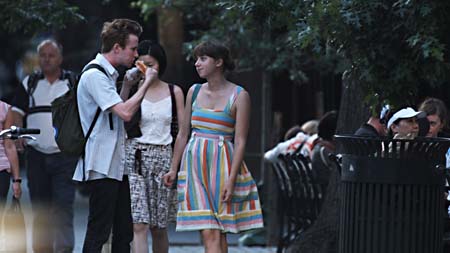 The Exploding Girl confines itself to a single week – spring break – when Ivy (Kazan) returns home from college to stay at her mother’s place in the city. It’s a mostly uneventful week. Ivy goes to doctor appointments, tries to get her absent boyfriend on the phone, and plays canasta in the park with a floppy-haired childhood friend named Al (Rendall), an unsure but unfailingly decent young man who broadcasts from his first quickly swallowed smile that he would like very much to be more than friends. The Exploding Girl’s chief concern, and occasional source of tension, is in its delicate detailing of Al and Ivy’s special dynamic, one that is defined by kindness, attentiveness, and familiarity; it’s that very specialness that discourages rather than encourages them to explore a romance. Ivy never explodes like you’d expect a 20-year-old girl in relationship distress would – she’s too contained, too self-possessed for that. Instead, the title’s promised volatility refers to Ivy’s epilepsy, which tends to strike when she’s under stress, and Gray’s film (his second feature, following 2003’s well-received Salt) is a clear-eyed and eloquent evocation of the cumulative stresses of a young woman troubled by both mind and body. Kazan appears in every scene of The Exploding Girl’s perfectly paced 80 minutes, and you’d miss her if she ducked out for even a moment. A less interesting actress would wilt under such scrutiny, but Kazan has extraordinary features – saucer-cup eyes, a commanding nose, an ovaled face – and an ability to communicate with her worn-out body what Ivy won’t put to words. (Gray uses the hypersensitive Red One camera, which ably captures every nuance, not to mention some gorgeous magic-hour silhouetting.) And Rendall, a Canadian actor, does a fine job with a very fine line indeed, where “smitten” can cross over into something pitiable. Restless audiences may itch for more plot, for the kind of fiery dramatics that typify young love in the movies, but hold the explosives: There’s tender drama, too, in the possibilities of a hand-hold. 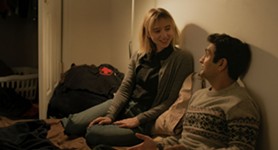 The Big Sick
The rom-com is dead! Long live the rom-com!