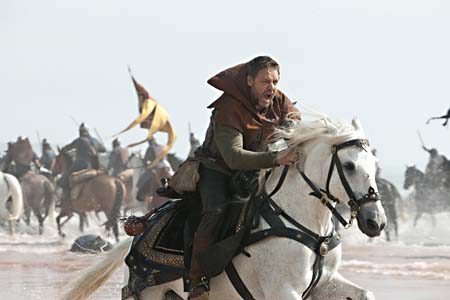 Scott’s revisionist rendering of the Robin Hood tale is full of well-staged battle sequences, though it shies away from the derring-do common to the many previous film versions of the legend. In fact, Scott’s Robin Hood ends at just about the point that other renditions of the tale begin. His is the story of how Robin Longstride (and, no, that’s not a name made up by Mel Brooks), an archer in Richard the Lionheart's last Crusade, became Robin of the Hood, the wily defender of the overtaxed people of Nottingham. As is popular in movies these days based on comic-book characters, this is an origin story. And though Scott and screenwriter Brian Helgeland strive to rectify certain historical inaccuracies in the Robin Hood legend, they also create some new lore of their own. It’s as though their Robin (Crowe) has been listening to a lot of Bob Dylan lyrics, especially that line about how in order to “live outside the law, you must be honest.” The experienced and wily soldier Robin defends the weak against the strong, and for this he is condemned to live as a guerrilla outlaw in the forest. But all that will be in the sequel, if there is one. In the meantime, this movie is all about Robin discovering his true calling – and, of course, Lady Marion (Blanchett), who here is no maiden but, rather, a Crusade widow. Her father-in-law, Sir Walter Loxley (von Sydow), guides Robin in the uncovering of his past and future. (In a repressed-memory flashback, Robin remembers the truth about the father whom he believed had abandoned him at the age of 6.) It turns out that Dad was a “visionary” and that father and son play parts in the creation of the Magna Carta. Crowe and Blanchett make a handsome pair, and von Sydow injects some knowing ounces of humanity into Scott’s epic. And though the film does an admirable job of parsing dense swaths of history and making the events and players understandable, Robin Hood is notably lacking in warmth. Scott is at his best directing the action sequences and moving the story forward but is unable to imbue the characters with any dimensionality. So much of what we love about the legend of Robin Hood is the chance to cheer for the hero who outwits all the rich bastards and gives the spoils to the poor. This new, focused Robin Hood is free of cheers and rousing emotions.